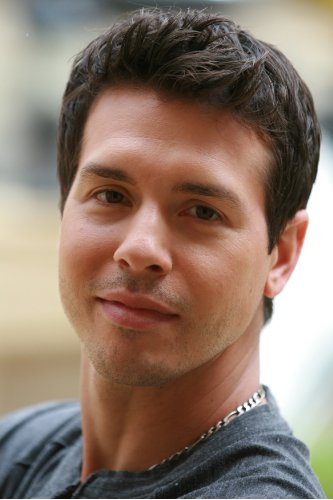 Actor Jon Seda (pictured) walks toward the end of the bar, takes a seat and begins a shady conversation with a city insider about what's happening in post-hurricane Katrina New Orleans.

The room comes alive. The crew begins moving lights, cameras, cables, chairs. Extras sprint from one end of the room to the other, back to their marks. Makeup artists and hair stylists move toward Seda and his scene-mate, actor Dan Ziskie, to remove the shine from their faces and put stray hairs back in place as they prepare for another take in season two of the HBO series, "Treme."

Seda, known for his roles in "The Pacific" and "Homicide: Life on the Street," brings to life a new character in "Treme": Nelson Hidalgo, a venture capitalist who comes to New Orleans looking to help the city rebuild a year after the killer storm, while helping himself in the process.

"This character is just the beauty of David Simon," said Seda, during a recent break in filming. "He (Simon) digs deep and tells the truth _ the good, the bad and the ugly."

Seda said Hidalgo looks to capitalize on an opportunity, as many people did after post-hurricane flooding ravaged New Orleans in 2005, and in the end comes to love the city and all that it has to offer.

"You know, a lot of money came through here after the hurricane and there are a lot of questions left about where that money is now. Those are the types of stories that should be told and that Simon tells so well," Seda said.

After Katrina, billions of dollars in federal aid poured in to help the city rebuild. An estimated 80 percent of New Orleans was flooded in the storm's aftermath and for a time the city was abandoned.

Season Two picks up in 2006 and looks at a period in the city when crime "came back with a vengeance," said Simon, the executive producer and co-creator with Eric Overmyer of the series based on the city's Treme neighborhood and the people who live there.

"Schools reopened in a schizophrenic form, there was a lot of discussion about land use and urban planning and there was a lot of gamesmanship about where the money was and how a lot of the money never made it to where it was supposed to go. These things are the backdrop for what these characters are experiencing."

Simon said this season he's also looking to showcase some of the emotions that ran rampant in the city.

"Everyone thought it would be easier," Simon said. "Initially, people were living on adrenaline. A lot of people were sustained by a sense of mission, of just physically trying to get back. But once they got back, they found that the city wasn't as easy to access or navigate. There was oppressive crime, a chaotic city government and a police department that was at a complete loss. It got harder for people and a lot were surprised by that. They figured the further out from the storm, the easier it would get, and that was not the case."

Seda said he's excited to be a part of a series that chronicles an important part of America's history.

"Katrina was such a traumatic event," he said. "But it also is a big part of our history. I think what happened here can't be and shouldn't be forgotten. It's on par with what happened to the twin towers in New York. There's a lot to be learned from this. I think something great comes out of every great tragedy and the City of New Orleans embodies that spirit and `Treme' shows that spirit to the world. There's not many shows that touch you like this one does."

Simon has worked with Seda before and said his portrayal of Hildago is spot-on.

"Eric (Overmyer) and I worked with him on `Homicide.' He had a thankless role on that show ... but played it beautifully. It's a delight working with him. He's a total pro. He shows up, ready to work and then he nails it. He is playing a role that is essential and shows how from the second season and beyond we'll be answering questions about where the money went. He plays it beautiful," Simon said.

Seda said he was humbled that Simon and Overmyer even considered him for the part.

"I've been very fortunate in my career," Seda said. "To know that they were thinking of me for this role ... I respect them so much. It was a no-brainer when I was asked to be a part. And when it comes to television, who can ask for a better place to land than HBO."

Crime novelist George Pelecanos, a producer for the bar scene and writer for the show, said Seda brings another perspective to viewers.

"He brings another dynamic that reflects the changes occurring in the city," Pelecanos said. "Going forward there's a little more conflict this year and in comes Seda's character. He's not here to exploit the situation, but recognizes there's a lot of opportunity for entrepreneurs."

Seda said before this role he'd never been to New Orleans and had not watched the series' first season.

"I didn't want to get too involved, and with this role, I didn't have to know everything because he's coming into it new. I wanted it (the character) to evolve organically, you know. I want to learn about a `second-line' for the first time when the character learns about it," he said.

Lucia Micarelli, who plays Annie, a naive and talented violinist on the show, is on stage with pianist Tom McDermott and clarinetist Evan Christopher during Seda's scene.

She said this season her character grows more, a reflection of what's happening in the city.

Season One saw Annie trying to balance a dysfunctional relationship with her musician boyfriend while trying to stretch her wings professionally.

"I like where she's going," Micarelli said of Annie in Season Two. "You see more of her personality. It's really great to play someone at that point in life, where she's on the precipice of something. It's very cool."

That kind of anticipation appears to be the string throughout the series this season, Seda said.

"David and Eric are always looking to move things up a notch. They're constantly thinking of what's next or how they can explore old material. They're constantly looking to bring more surprises and intriguing elements to the viewer. They have a way of bringing you on a slow climb up a mountain and taking us on a journey and adventure in the process. Yes, it might be time-consuming, but anything worthwhile usually is, and these opportunities don't come around often."

The new season's first episode airs in the U.S. on April 24.