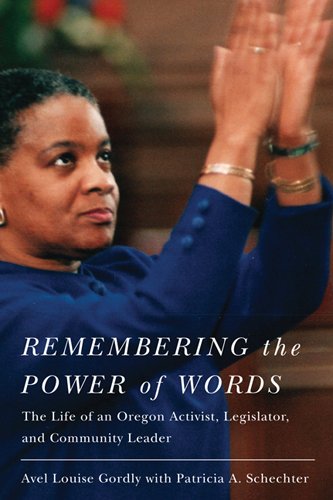 The book is the first in a planned series "Women and Politics in the Pacific Northwest." Gordly served in the state senate from 1991 to 2008. She's received numerous awards from the community that she served including the Black United Front, the American Friends Service Committee, the Urban League of Portland, and the House of Umoja.

In "Power of Words" she shares the challenges and struggles she faced growing up Black in Portland in the 1950s and 1960s, as well as her determination to attend college, the dedication to activism that took her from Portland to Africa, and her eventual decision to run for a seat in the state legislature.

That words have power is a constant undercurrent in Gordly's account and a truth she learned early in life. "Growing up, finding my own voice," she writes, "was tied up with denying my voice or having it forcefully rejected and in all of that the memory of my father is very strong. To this day—and I am today a very experienced public speaker—preparation to speak takes a great deal of energy." That this memoir has its origins as an oral history is fitting since Gordly has used her voice, out loud, to teach and inspire others for many years.