By The Skanner News
Published: 14 February 2011 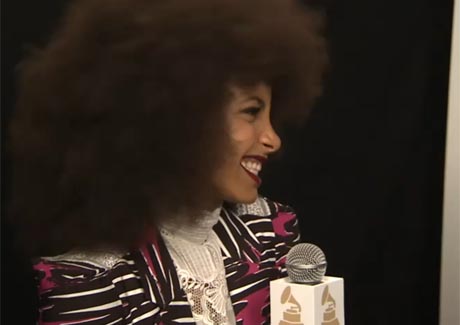 (AP) -- The Grammys love Eminem. Over his decade plus career, they've showered him with 13 Grammy Awards — and gave him two during this year's ceremonies.

But their love for Eminem seems to only extend to the rap categories. Despite being regarded as one of music's geniuses, he has never won a Grammy outside of the genre — a streak that continued on Sunday. The Skanner News Video: Esperanza Spalding

Eminem, who went into the Grammys as the leading nominee with 10 nominations, including in the prestigious album, record and song of the year categories, walked away with just two: best solo rap performance and best rap album for "Recovery," which was last year's best-selling album and marked a triumphant comeback for an iconic figure who stumbled in recent years due to a former drug addiction.

He lost album of the year to Arcade Fire's "The Suburbs," and his Rihanna-assisted "Love The Way You Lie" lost to Lady Antebellum in the record and song of the year categories.

It was their night on top in the pop world after a year of coming in second place. Their crossover hit, "Need You Now," peaked at No. 2 on the pop charts, and their album of the same name was 2010's second best-selling album, behind Eminem's "Recovery."

But on Sunday night, they were No. 1.

"That is the most humbling feeling in the entire world. It's going to make us work even harder to make a better record," said Hillary Scott, as bandmates Dave Haywood and Charles Kelley stood by her backstage.

It was the second year in a row that a country act with multiplatinum crossover appeal won big at the Grammys: Last year, it was Taylor Swift, who got four awards and won album of the year for "Fearless."

This year, that award went to "The Suburbs," which marked Arcade Fire's only Grammy win that evening, and in 10-year career in which they have been consistent critic's darlings. Though the album was considered to be among the year's best, Eminem was still the favorite — so much so that Arcade Fire's Win Butler uttered "What the hell?" when they went onstage to accept their award.

Immediately following the win, the group — who had just performed — headed to the stage in an apparently spontaneous move and played their song "Ready to Start," where band member Win Butler advised: "Everyone leave to this song."

Spalding, 26, was the first jazz artist to win the award, and beat out 16-year-old pop phenom Justin Bieber, along with Drake, Florence and the Machine and Mumford and Sons.

"I feel really lucky today," she said backstage. "From the world that I come from this is the beginning of the beginning for me."

Other key winners on the night included Lady Gaga, Jay-Z and John Legend, who all won three awards each, tying them for most wins following Lady A. Usher, Herbie Hancock, Jeff Beck and the Black Keys joined Eminem with two wins each.

Gaga performed her new single "Born this Way" and entered the stage in dramatic fashion — as usual. She was encased in an egg, then "hatched" onstage to perform the dance tune.

Her hit song "Bad Romance" won best female pop vocal performance and best short form music video. When she won best pop vocal album for "The Fame Monster," she said Whitney Houston played in a role in the making of her new song.

"I wanted to thank Whitney because when I wrote 'Born This Way,' I imagined she was singing it because I wasn't secure enough in myself to imagine I was a superstar," she said.

Eminem wasn't the only hip-hop star to lose in the night's top honors: Newcomer B.o.B, who had 5 nods, went home empty handed, while Cee Lo Green's expletive-laden smash, "(Expletive) You," also known as the edited "Forget You," only won best urban/alternative performance.

But Cee Lo had one of the night's best performances: Dressed in a colorful feather getup that looked made him look like a gigantic colorful bird, he was joined onstage by Gwyneth Paltrow and Jim Henson Co.'s puppets, giving a funny and unforgettable performance of "Forget You."