"12 Angry Men: True Stories of Being a Black Man in America Today" 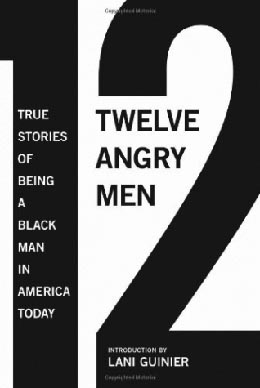 In "The Rage of a Privileged Class," Ellis Cose carefully chronicled the assortment of frustrations experienced by educated Blacks upon entering the corporate world. In "12 Angry Men," a dozen brothers are allowed to give full vent to their feelings about another indignity routinely suffered by the majority of African-American males, namely, racial profiling.

Unless you've been subjected to such un-Constitutional treatment, you are unlikely to be very sympathetic. After all, it is reasonable to think that if someone's not breaking the law, they presumably should have no problem cooperating with the cops for what ought to amount to a momentary inconvenience.

But I could write at length from personal experience about the trauma inflicted on my psyche by the time I was 25 by a decade of being routinely stopped and frisked by police about once a month or so, and always on the flimsiest of pretexts. Back then, the prison industrial complex was undergoing a mammoth growth spurt thanks to the so-called "War on Drugs," which was really just a rationale for feeding the corporate beast with the bodies of millions of non-violent, Black offenders.

And judging by the accounts related in "12 Angry Men: True Stories of Being a Black Man in America Today," the situation hasn't improved much over the interim. Here, a 35 year-old family man recalls how he was recently strip-searched right in front of his neighbors by NYPD detectives who suspected him of possessing narcotics. When they didn't find any contraband, they left him to pull up his own pants without as much as an apology.

Just as humiliating was the ordeal of the "head of the ACLU's racial profiling division who was himself profiled at Boston's Logan Airport coming home from a racial profiling conference." Then there's the case of U.S. Congressman Daniel K. Davis, who was ostensibly guilty of driving while Black after doing his weekly radio show back in his Illinois district one evening.

When Congressman Davis had the temerity to ask why he had been pulled over, the incensed officer not only gave him a phantom ticket, but inexplicably took away his driver's license for good measure. Despite his grey hair and advanced age, Davis wasn't exactly surprised by the incident, since he says that, "Over the years, I have been stopped by the Chicago police so many times I couldn't count them."

The solution? Harvard Law School graduate Bryonn Bain, himself a victim of police brutality because of the color of his skin, sarcastically proposes the passage of a Black Man's Bill of Rights, 10 tongue-in-cheek Amendments to the Constitution. But the rest of this eye-opening tome's entries adopt a much more serious tone to drive home ever so effectively the salient point that state-sanctioned racial profiling amounts to a painful assault on individual dignity and a serious impediment to the collective American Dream of a colorblind society.