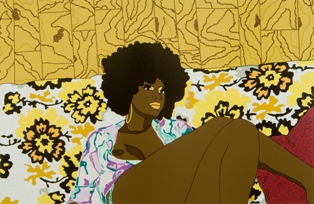 On Jan. 8, the Portland Art Museum opened "Safety in Numbers? Images of African American Identity and Community." Drawn from the Museum's collection and private lenders, the exhibition features approximately 50 prints, drawings, and photographs exploring the ways in which isolation, community, and the search for identity affected African Americans during the 20th century.

Early in that century, 47 percent of the Black population migrated from the rural South to the industrial North in search of the American dream. Through often poignant imagery, the exhibition examines the ways in which artists portrayed the struggle of blacks to forge a new life, both public and private, in the Northern urban centers of the United States.

While the majority of artists featured in the exhibition are African American, several non-black artists whose work is especially insightful in observations of the black community are included. Throughout the 20th century, images of black Americans revealed unique symptoms of displacement and the search for identity and community through ever more complex means.

On view in the Adams Foundation Foyer and Helen Copeland Gallery, the exhibition is organized by the Portland Art Museum and curated by Jennifer Harper, Ph.D., curatorial assistant. A complimentary brochure accompanies the exhibition. Supported in part by the Vivian and Gordon Gilkey Endowment Fund.

Call and Response: Delving into African American Art and Literature

In partnership with Literary Arts' Delve: Readers Seminars, the Museum presents an opportunity to join guide Lois Leveen and a group of readers to explore intersections of 20th-century African American art and literature. Leveen earned degrees in history and literature from Harvard, USC, and UCLA. Her work has appeared in Bridges, Monkey Puzzle, and the book Queer Portland. Familiarity with the texts or authors is not required, but space in each seminar is limited to 16 participants, so please enroll early.

From A to B and Black Again

Artist and curator Arnold Kemp will give his personal observations about what it is to be an African American artist in the 21st century through specific examples of artists and their work in Safety in Numbers?. He will discuss the work of Lorna Simpson, Glenn Ligon, and a younger generation of artists in relation to his own work as an artist, writer, curator, and educator.