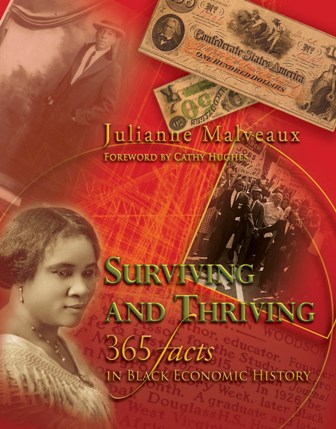 "In her poem, 'And Still I Rise,' Dr. Maya Angelou wrote, 'You can write me down in history with your bitter, twisted lies, you can trod me in the very dirt and still, like dust, I rise.' More than a century before she penned her words, Richard R. Wright, Sr., a man born into slavery… asked [Union] General Oliver Otis Howard to 'Tell them we are rising.'

Wright's 19th C. vision… has currency today. …Tell anyone who will listen that, while the playing field is not yet level, African-American people can play the game, win it, and even change the rules to make them fairer.

Tell them we are rising, surviving and thriving."

-- Excerpted from the Introduction (pg. xliii)

The accomplishments of African-Americans have generally been omitted from the history books, when it comes to the field of economics. Consequently, most Black kids grow up unaware that despite the obstacles the nation deliberately placed in the path of their ancestors during the days of slavery and the repressive era of Jim Crow segregation, many miraculously managed to flourish financially anyway.

While many accounts of the exploits of the heroes of the Emancipation and Civil Rights Movements have been published for posterity, the achievements of Black business leaders have rarely been the subject of scrutiny. For this reason, a debt of gratitude is owed to Dr. Julianne Malveaux, author of "Surviving

Her informative text might be best thought of as a bound version of one of those page-a-day theme calendars, except that instead of serving up jokes, words or spiritual reflections, this features a year's worth of entries about African-American companies and captains of industry. A few of her subjects are familiar household names, such as BET founder Bob Johnson and hip-hop pioneer Russell Simmons. However, most of the bios here are apt to be eye-opening intros to someone you've never heard of.

For example, there's Sarah Gammon Bickford, a former slave-turned-public utility owner who moved to Virginia City, Montana where she came to supply the town's water after acquiring a natural spring. Then, there's seamstress Elizabeth Keckley, a sister who owned the largest custom dressmaking business in ante bellum Washington, DC. Before the outbreak of the Civil War, she designed outfits for both First Lady Mary Todd Lincoln and the wives of eventual Confederates President Jefferson Davis and his General Robert E. Lee.

In sum, an inspirational tome design to serve as a daily reminder of the role that African-American entrepreneurs have played and continue to play on the path to freedom and equality.

To order a copy of Surviving and Thriving, visit: