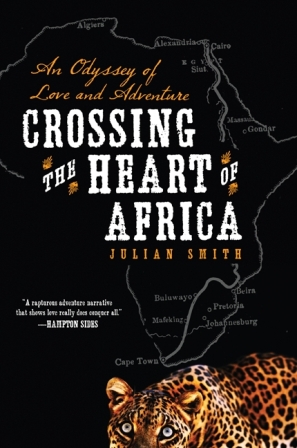 In 2007, Portland-based journalist Julian Smith was about to marry the love of his life. But fearful of the commitment, he began searching out a voice of reason.

He found Ewart "The Leopard" Grogan.

Over 100 years ago, Grogan traveled the length of the African continent to prove his mettle to the family of his soon-to-be wife. Inspired, Smith followed the British explorer's route from Mozambique to the northern part of Africa and recorded his journey in "Crossing the Heart of Africa: An Odyssey of Love and Adventure."

Here he speaks with The Skanner News about a trek that took him across two of Africa's Great lakes, through poor rural villages and near some of the continent's long-standing conflicts.

The Skanner News: What motivated you to travel the length of Africa?

Julian Smith: About three years ago, I was engaged to marry to my now wife, Laura. I was crazy in love with her at the time and still am, and I was kind of honestly freaked out by making a lifelong commitment. I was an only child, then self-employed as a writer for a long time, footless and free, so the idea of marrying and settling down was pretty scary. I was looking for some way to help me to come to terms with that and I came across the name of this British explorer Ewart Grogan, who, about 100 years ago, wanted to marry this woman but her stepfather said he hadn't done anything to prove himself worthy in his 24-year lifespan. So he came up with this plan to be the first person to walk the length of Africa to prove himself to win this woman's hand in marriage.
I was inspired by that and quite possibly was looking for one last trip before tying the knot. So I decided to be the first person to retrace his route.

TSN: Where did you start your journey?

JS: I flew into Johannesburg, South Africa and the real route started on the coast of Mozambique in the city of Beria, which is where Grogan's trip started. I was able to make it to eight countries. I went up through Mozambique, Malawi, Tanzania, Burundi, Rwanda, Uganda and I made it as far as southern Sudan before I ran out of time and had to get back to go to our wedding and it really wasn't safe to go any farther. What Grogan did was made it to Southern Sudan and made it through an incredibly dangerous swamp and then hopped a series of boats up the Nile all the way to Cairo, I made it pretty close to where his actual trek ended. He made it another couple hundred miles north of where I did. Beyond that it was basically a boat trip. I made it 90 percent of his overland trek.

TSN: How true to the original route were you?

JS: As close as I could be, given the restraints on time, safety and logistics. He was entirely on boat – Lake Malawi and Lake Tanganyika basically run north and south and he took boats from south to north which I did as well. They have public ferries running now, overnight ferries, beyond that I was on buses, minibuses, motorcycle, bikes at some point. It was all public transportation.
I ended up not going into the Eastern Congo, he went a little bit into what is now the Eastern Congo. It ended up being the hairiest part of his trip, he ended up literally being chased by cannibals for a couple of days. And it hasn't gotten much better since then. It's really, really dangerous in the Congo. I decided to stop when I got to Juba in Southern Sudan, it was the same story, and farther north of that it was going to be really difficult and dangerous.

TSN: Were there any moments that you came as close to death as did Grogan?

JS: Well, you take your life into your hands the minute you step onto a minibus or ferry, those things sink or fall off cliffs all the time. But there wasn't any specific instance where I thought, "I might not make it out of this alive," but there were definitely some high discomfort levels but no life threatening ones.


TSN: Besides using public transportation, how many other methods of modern technology did you use to plan your route?

JS: (Grogan) wrote a book about his trip, so I took that with me, and maps that were in the book and I plotted it as closely as I could on my maps. I didn't take a cell phone, I didn't take GPS, it was all basically maps and the occasional email along the way in the bigger cities.


TSN: Tell me a little about your interactions with people along the way.

JS: People on the whole were incredibly friendly, especially when you're getting into the backwoods parts of Africa, where you're the only White person in sight. Quite often, people are amazed you're even there. They'll come up and talk to you, if they can speak English. When I was lost, I'd ask for help, and go up to the nearest person and just say, I'm in an emergency. It's really amazing how often people will come to your rescue, invite me into their house and meet their family. There were a few not so pleasant interactions, but they were far the minority.

TSN: What was the food like? Did you get invited into people's homes to eat?

JS: Yeah, I did. It's not really a gourmet destination. It's usually really plain and simple. The food definitely wasn't a highlight. They'd invite me over for tea and cassava – a starchy root that they boil. Most of the time people are unbelievably poor there and they'll eat whatever they can get, it's not very delicious by our standards. I lost some weight on the trip, let's put it that way.


TSN: Did you ever go without food?

JS: There were some long stretches without meals, far from the border and I wouldn't have time to exchange cash for that country's currency, so there were some long stretches but I never went without. Usually on the buses, every time it stops, there are tons of people coming up to the windows selling hard-boiled eggs or other street foods. There was usually a greasy snack within reach.


TSN: What were your main routes of transit?

JS: I didn't actually do much walking, I was always rolling. It was all either highways or really bad back roads, they ran the whole gamut.

JS: I didn't have the time. I mean it was four and a half thousand miles and even going by public transportation, I was still moving the whole time, there wasn't really a lot of sight-seeing time. I was almost every day wondering where I was going to sleep the next night.


TSN: Were there enough hotels or boarding houses along the way?

JS: Yeah, usually. Sometimes it was a bit of a struggle to find a place to sleep. Some of these real out-of-the-way places, you pull in not knowing if there is a hotel or guesthouse. I always found some place to sleep, some places were worse than others. … On boats, on Lake Malawi and Lake Tanganyika, they're both overnight boats, so the Lake Malawi one I slept on deck, I wrapped up in a poncho. On Lake Tanganyika, I splurged for a cabin, which has tiny bunk beds and everything, because that was three nights I spent on that boat. That's a really interesting story, it was a German ship transport back in World War I and they ended up sinking it and bringing it back up and turning it into a passenger ferry. It was actually the inspiration for the film "African Queen" where they're trying to sink that German ship … I think it's the oldest passenger ferry in the world.


TSN: Did you come away with any insights into the entrenched problems of these African nations – whether it be the conflicts, poverty or lingering problems of colonization?

JS: That was one interesting part of it. When Grogan was there, it was the peak of European colonization. Now, you can see the fallout from that. Going from one country to the next, depending on who colonized them, a lot are better off or worse off. For example, the ones  that England colonized are better off today because they were run well and organized, whereas the ones that,say, Belgium colonized, like the Congo, they were just run like a factory to produce rubber, the place hasn't gotten its stuff together since then. So that was interesting to see. A lot of the tribal issues Grogan saw 100 years ago are still playing out today. Like the one in Rwanda. He noticed that there was one tribe in the minority that had the power over the huge majority tribe. He thought it was pretty stable, but 100 years later we had the Rwandan genocide.


TSN: Did you talk to people about these issues?

JS: Mostly I was talking with everyday folks on the street, not as concerned with big picture stuff as they are with feeding their families and finding work. I talked with national park guys who have really great jobs by comparison, who really enjoy the work they do, and other people that don't know where the next paycheck is coming from, if at all. It really puts things in perspective. It's a really different world. It's really a different planet.


TSN: How was this different from your other experiences doing travel journalism?

JS: It was a lot more tiring, I'll say that. My travel writing has been guide books and articles. This was certainly the longest time I spent moving nonstop. It's different, because with travel writing, you're doing fancy stuff and plush places … a lot of times on package tours.

Everybody there asked where you're from. Nobody has a neutral opinion of the United States in Africa. Almost everybody loves the United States, because we've done a lot of good. People are trying to survive and be happy, except their trying to do it on five dollars a day.

There's the whole health aspect too, they'll drop things like, 'my first child died' and go on talking because it's a lot less unexpected over there, or talk about being an AIDS orphan, which is, in a country where 1 in 10 are AIDS orphans, it's horrible but not all that unusual. It really does put things in perspective.


TSN: Did the issue of AIDS come up in a lot of conversations?

JS: Yeah, depending on the country, it comes up a lot along the way. In countries like Uganda and Burundi or Malawi, there's a serious, serious problem. It affects everybody. Over here, it's kind of fallen off the radar, but over there countries where large numbers of the population have AIDS or are orphans … there's a lot of charity work and it's a huge part of daily life. A lot of safe sex campaigns trying to fight it.


TSN: Did the trip work to win over the heart of Laura, your wife?

JS: It was more to convince myself, then it was to convince her. She was all for it, she drove me to the airport and said if this is what you need to do and come back and be into this marriage thing, then do it. Maybe it was taking myself away from her for long enough to miss her, so yeah it worked.