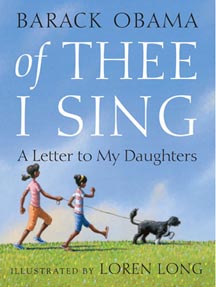 "In this tender, beautiful letter to his daughters, President Barack Obama has written a moving tribute to thirteen groundbreaking Americans and the ideals that have shaped our nation. From the artistry of Georgia O'Keefe to the courage of Jackie Robinson, from the strength of Helen Keller to the patriotism of George Washington, President Obama sees the traits of these heroes within his own children, and within all of America's children…
This beautiful book is about the potential within each of us to pursue our dreams and forge our own paths. It celebrates the characteristics that unite all Americans, from our nation's founders to the generations to come."
Excerpted from the inside cover

Sasha and Malia Obama are now 9 and 12, respectively, which actually makes the First Daughters a little older than the 4-8 demographic contemplated as the target audience for this children's book designed as a letter to them from their doting dad. Of Thee I Sing is basically a baker's dozen, brief biographies of important figures in American history, from Father of the Country George Washington up to Maya Lin, the artist/architect who, while still an undergraduate at Yale, designed the Vietnam Veterans Memorial located on the National Mall.

Each subject's entry is accompanied by an evocative airbrush portrait by Loren Long, an award-winning illustrator who has previously collaborated with the likes of Madonna and Walt Whitman. For example, the drawing of Jackie Robinson's captures the late baseball great at bat in his Brooklyn Dodgers uniform, while that of artist Georgia O'Keefe shows her in the midst of painting one of her trademark flowers in full bloom.

My only quibble with President Obama's picks here is with his predecessor Washington, a wealthy plantation owner who never emancipated his 300+ slaves at Mount Vernon, not even upon his death. This opus conveniently makes no mention of that glaring moral failing, opting to focus instead on the first President's "principles" and on his patently hypocritical belief "in liberty and justice for all."

Although I'm willing to give the author a Mulligan since he presently has many more pressing issues on his plate, I was nonetheless pleased by the inclusion of the likes of Dr. Martin Luther King, Jr., Sitting Bull and Albert Einstein. There was a method to Obama's madness, here, as each choice is hailed for a prevailing trait, ranging from creativity to intelligence to bravery and beyond.

The literary equivalent of a "Yes We Can!" rally led by our charismatic Commander-in-Chief for the benefit of the Sesame Street set.