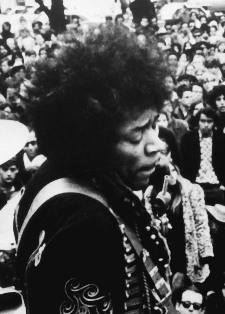 LONDON — They were both immigrants in Britain who changed the face of music — one with a harpsichord and a composer's pen, the other with an electric guitar.
George Frideric Handel and Jimi Hendrix also shared an address, living 200 years apart in adjoining 18th-century London houses. Now, 40 years after Hendrix's death, a new exhibition about his London years brings these two unlikely neighbors together.
Hendrix, who came to London as an ambitious but little-known guitarist in 1966, was aware of his link to the musical past. He bought recordings of Handel's "Messiah," and obligingly gave tours of his apartment to music students who knocked on the door looking for traces of the composer.
"He once claimed to have seen a reflection of Handel's face in his shaving mirror," said Martin Wyatt, deputy director of the Handel House Museum, which is mounting an exhibition about Hendrix's London years that opens to the public Wednesday.
"Hendrix was convinced he was living in Handel's house — but actually he was living next door."
Handel lived at 25 Brook Street — a Georgian house in the tony Mayfair area — for 36 years until his death in 1759. The museum devoted to his life uses the adjoining upstairs apartment where Hendrix lived as offices.
Museum curators hope to raise money to restore the apartment to its 1960s glory and open it as a permanent Hendrix exhibition.
For now, members of the public will be able to visit for 12 days next month. They will have to use their imaginations to picture the small, whitewashed rooms with their utilitarian desks as they were then, decorated in garish 60s style with red carpets and turquoise velvet curtains, chock-a-block with guitars, amps, rugs and knickknacks.
"All the photos look really classy until you see them in color," said the museum's learning and events officer, Claire Parker.
Handel had paid 60 pounds a year for the house, the equivalent of about 5,000 pounds ($7,700) today. Hendrix and his girlfriend Kathy Etchingham paid 30 pounds a week — a consierable sum for the 60s, equivalent to about 350 pounds a week today.
By all accounts Hendrix enjoyed the domestic side of London life — though the appliances were not always up to his modern American standards.
"When they first moved in, Hendrix was horrified to find a 1950s gas fridge, which he thought was the most old-fashioned thing he had ever seen." Parker said. They bought an electric one, as well as a yellow Formica kitchen table.
Parker said Hendrix "was quite well known in John Lewis," the venerable London department store.
"It's this other side of him you don't really think about — Jimi Hendrix shopping for carpets and soft furnishings."
When he wasn't at home, Hendrix was honing his sound and building his reputation through incendiary live shows. He came to London in 1966 after being spotted by producer Chas Chandler playing in a New York bar with his band Jimmy James and the Blue Flames.
He began gigging immediately — a list of his British shows in the exhibition has scores of entries, from pubs to provincial working men's clubs to the vast Isle of Wight rock festival. In 1967 he released the acclaimed album "Are You Experienced?" and soon was touring internationally, gaining fame for his innovative, heavily distorted guitar style.
"He was an absolute revelation to everyone here," Wyatt said. "It was like an earthquake rumbling through the music scene."
"I think for Hendrix London was much more open — in America he was too white for black music and too black for white music. Here there was a burgeoning blues scene that wasn't that categorized."
The Hendrix exhibition, which runs to Nov. 7, is a bit of a shock next to the muted gray walls, oil paintings and harpsichords of the rooms devoted to Handel's life.
Among the exhibits are the Gibson Flying V guitar that Hendrix played at the Isle of Wight festival in August 1970, handwritten lyrics and a splendid orange velvet jacket and black Westerner hat.
There is also a copy of Hendrix's death certificate ... Sept. 18, 1970, aged 27.
Wyatt said some of the museum's supporters were skeptical at first about the Hendrix display. But he is struck by the similarities between the two musicians.
"They were both great improvisers," he said — Handel on harpsichord, Hendrix on guitar.
He said that on the occasional past openings of Hendrix's apartment, the guitarist's fans have sometimes stayed to listen and learn about Handel.
"We're hoping the exhibition will open the road the other way."