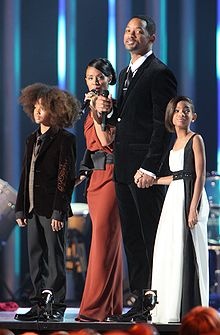 NEW YORK (AP) -- Call her the Fresh Princess.
Will and Jada Pinkett Smith's 9-year-old daughter, Willow Smith, is making her debut as a recording artist.
She has signed a deal with Jay-Z's label, Roc Nation.
Her first song was released this week. It's called ``Whip My Hair.''
Jay-Z says it's rare to find an artist with such talent and creativity at Willow's age.
Will Smith first gained fame as a rapper, but unlike her father, Willow is singing on her record.
Like her father, she's a double threat: Willow appeared in the movie ``I Am Legend,'' with her dad.
___