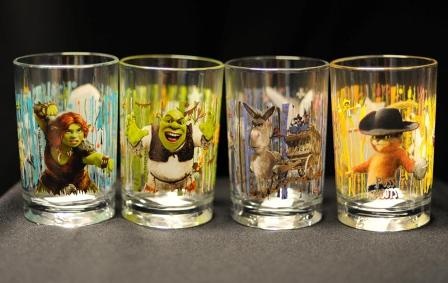 LOS ANGELES—Cadmium has been discovered in the painted design on "Shrek"-themed drinking glasses being sold nationwide at McDonald's, forcing the burger giant to recall 12 million of the cheap U.S.-made collectibles while dramatically expanding contamination concerns about the toxic metal beyond imported children's jewelry.
The U.S. Consumer Product Safety Commission, which announced the voluntary recall early Friday, warned consumers to immediately stop using the glasses; McDonald's said it would post instructions on its website next week regarding refunds.
The 16-ounce glasses, being sold for about $2 each as part of a promotional campaign for the movie "Shrek Forever After," were available in four designs depicting the characters Shrek, Princess Fiona, Puss in Boots and Donkey.
In the animated comedy, which debuted May 21 as the latest installment of the successful DreamWorks Animation franchise, the voice of Shrek is performed by Mike Myers of "Austin Powers" fame, Cameron Diaz performs as Princess Fiona, Antonio Banderas as Puss in Boots and Eddie Murphy voices Donkey. The movie has been No. 1 at the box office since its release.
The CPSC noted in its recall notice that "long-term exposure to cadmium can cause adverse health effects." Cadmium is a known carcinogen that research shows also can cause bone softening and severe kidney problems.
In the case of the Shrek-themed glassware, the potential danger would be long-term exposure
to low levels of cadmium, which could leach from the paint onto a child's hand, then enter the body if the child puts that unwashed hand to his or her mouth.
Cadmium can be used to create reds and yellows in paint. McDonald's USA spokesman Bill Whitman said a pigment in paint on the glasses contained cadmium.
"A very small amount of cadmium can come to the surface of the glass, and in order to be as protective as possible of children, CPSC and McDonald's worked together on this recall," said CPSC spokesman Scott Wolfson. He would not specify the amounts of cadmium that leached from the paint in tests, but said the amounts were "slightly above the protective level currently being developed by the agency."
Wolfson said the glasses have "far less cadmium than the children's metal jewelry that CPSC has previously recalled."
Concerns about cadmium exposure emerged in January, when The Associated Press reported that some items of children's jewelry sold at major national chains contained up to 91 percent of the metal. Federal regulators worry that kids could ingest cadmium by biting, sucking or even swallowing contaminated pendants and bracelets.
The consumer protection agency has issued three recalls this spring for jewelry highlighted in the AP stories, including products sold at Wal-Mart, the world's largest retailer; at Claire's, a major jewelry and accessories chain in North America and Europe; and at discount and dollar stores.
Those recalls all involved children's metal jewelry—and all of that jewelry was made in China.
Manufactured by ARC International of Millville, N.J., the glasses were to be sold from May 21 into June. Roughly seven million of the glasses had been sold; another approximately five million are in stores or have not yet been shipped, said Whitman.
Associated Press reporters tried unsuccessfully to buy the glasses late Thursday at McDonald's in New York, Los Angeles and northern New Jersey but were alternately told the merchandise was sold out, no longer available or "there'll be more tomorrow."
The company that makes the drinking glasses said it only learned of the problem late Thursday and will look into it. Tom Reed, vice president of human resources at Arc International's plant in Millville, N.J., said the company received a copy of a McDonald's memo on the recall but has not heard anything else.
Reed would not say where the paint was made or whether it's used in Arc's other products. Arc is based in France and owns the Pyrex brand of cookware in Europe.
McDonald's said it was asking customers to stop using the glasses "out of an abundance of caution."
"We believe the Shrek glassware is safe for consumer use," Whitman said. "However, again to ensure that our customers receive safe products from us, we made the decision to stop selling them and voluntarily recall these products effective immediately."
Whitman said that as the CPSC develops new protocols and standards for cadmium in consumer products, "we adjust as necessary to ensure that our customers can continue to trust what they receive from McDonald's."
Federal scrutiny of the glasses began last week. The Washington office of U.S. Rep. Jackie Speier, a California Democrat who has proposed strictly limiting cadmium in jewelry, received what a spokesman described as an anonymous tip that testing with an X-ray gun that estimates how much cadmium an item contains indicated the metal was present in the glass paint. Speier's office requested samples of the glasses from the tipster, and upon receiving them May 27 sent them to the CPSC for further investigation.
"Our children's health should not depend on the consciences of anonymous sources," Speier said in a statement Friday. "Although McDonald's did the right thing by recalling these products, we need stronger testing standards to ensure that all children's products are proven safe before they hit the shelves."