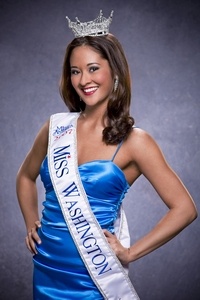 Earlier this year, the second runner up in the 2008 Miss America competition, and winner of the 2007 Miss Washington Pageant, stepped forward to talk about her experience as a victim of domestic violence. Elyse Umemoto says she was stalked and assaulted by her boyfriend in 2007 and 2008. Her attacker pled guilty last year to charges related to the incident.
On Tuesday, Umemoto will speak in favor of legislation to better protect victims of the worst domestic abusers. She'll join representatives of the Attorney General's Office, state legislators, prosecutors and victims' advocates to commemorate Domestic Violence Awareness Month by calling for a new law that requires longer prison terms for serious, repeat domestic abusers.
The proposed law, written by the Attorney General's Office, died in committee during the 2009 legislative session. Current law grants longer prison terms for repeat car thieves than for repeat domestic abusers. A bipartisan group of legislators has pledged to support a new version of the proposed law when it is introduced in the 2010 session.