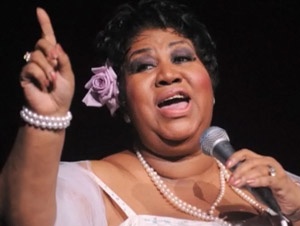 On the eve of a Brooklyn, New York concert, Sunday August 1st,  Aretha fell in her house and broke some ribs that give her abdominal pain.
The Queen of Soul was advised by doctors to undergo further medical tests and not do any singing.

She will have to skip the second New York concert on Aug 12, but reassures us that she is recovering.

Efforts are under way to reschedule the canceled concerts for late August, so maybe she can enjoy her foot-long hot dog at Coney Island then.
Let's say a little prayer for Aretha!

Brooklyn's Marty Markowitz "All of Brooklyn wishes Aretha Franklin a speedy recovery. Certainly thousands of music lovers were eagerly awaiting these historic shows, her first ever in Brooklyn, in the heart of our African-American community in Central Brooklyn and in world-famous Coney Island. "