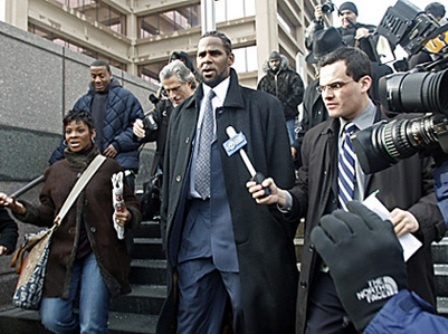 The 37-year-old defense attorney will try to work the same magic on Monday, closing for Rod Blagojevich at the ousted governor's corruption trial. But he will do it -- for the first time in his career -- at the Dirksen Federal Building, a more staid atmosphere where many believe Adam's theatrics and booming rhetoric can't win.
The much anticipated closing will be a big moment for Blagojevich and Adam. If Adam persuades jurors of his client's innocence, he will have proven detractors wrong and could establish himself as a rising legal star on a stage beyond Chicago.
Attorneys at the Dirksen Building, many of whom went to the finest law schools, tend to look down on their counterparts at the criminal courts building, known as ``26th and Cal'' for its location at 26th and California streets. There, many attorneys started in traffic court and worked their way up.
``They're different worlds,'' says Michael Helfand, a Chicago attorney with no link to the case. ``If Adam gets too carried away, the judge could certainly stop him. That could be a disaster in closings because you lose your rhythm.''
Before a packed courtroom, prosecutor Chris Niewoehner will go first Monday, connecting the dots of a complex case in a cool, just-the-facts-ma'am manner more common at the federal courthouse.
But the spotlight will be on the burly, colorful Adam, who has already clashed with Judge James Zagel and faces a considerable challenge: Defending his client after not introducing a single witness or piece of evidence.
The defense rested on the day prosecutors finished five weeks of calling witnesses and playing wiretap recordings of a foul-mouthed Blagojevich allegedly scheming to parlay decisions as governor into personal gain.
Blagojevich, 53, has pleaded not guilty to 24 counts, including trying to sell or trade an appointment to President Barack Obama's vacated Senate seat for a Cabinet post, private job or campaign cash.
His brother, Robert Blagojevich, 54, has also pleaded not guilty to taking part in that alleged scheme.
Adam has a record of around 60 wins and five losses in trials when he delivers the closing. After one last year, a jury acquitted a client accused of murder for stabbing his neighbor 61 times.
During a break from his preparations Saturday, he told The Associated Press he won't use notes during his Blagojevich closing, which will last more than two hours. He'll memorize the outlines -- but improvise, too.
Adam, affable and gregarious outside court, said his objective is to both tell a story and put on a show.
``That doesn't mean a show in the clownish sense,'' he said. ``But you've got to figure out how to best make your argument. If you can do it in an entertaining way, not only are jurors not bored -- they'll understand and accept it more.''
His colleagues say Adam knows how to connect with jurors.
``When Frank Sinatra sang at nightclubs, every woman believed he was singing to her,'' said another Blagojevich attorney, Sheldon Sorosky. ``Sam has that, too. Every person on the jury thinks he's talking to them.''
Adam's father and law partner, Sam Adam Sr., said he took Sam Jr. to 26th and Cal as a boy, urging him to converse with everyone from bailiffs to janitors. If you want to be a trial lawyer, he told him, don't learn to talk like one.
``The problem with most lawyers is they spend all their time with other lawyers,'' said Sam Adam Sr., 74. ``At trial, you're not talking to other lawyers but to jurors who are waitresses, teachers, firemen.''
Blagojevich jurors include several ex-Marines and a one-time postman.
``Most lawyers aren't used to talking to ordinary people,'' added Sam Sr. ``My son is.''
That ability was on display at R. Kelly's trial in 2008. He shouted and pleaded one second. The next, he laughed or whispered. And he pounded his fist. At various times, he invoked God, Satan, Santa Claus and McDonald's.
He displayed that blend of indignation and folksy humor opening for Blagojevich last month.
``You have to be comatose not to figure out how to get a dollar out of $52 billion,'' he thundered, referring to the state budget. ``But who didn't?'' he continued, spinning and pointing at Blagojevich. ``Him!''
Adam also told jurors Blagojevich wasn't going to let a ``chubby, four-eyed lawyer'' talk for him but would testify himself. He never did.
Some saw that as a mistake, a broken promise to jurors. Others suggest Adam outfoxed prosecutors by leading them to think Blagojevich would testify -- thereby holding back some evidence for rebuttal.
Judge Zagel will instruct jurors not to give any weight to Blagojevich's decision not to testify. But Adam is likely to tell jurors that prosecutors failed to prove any crime, rendering the ex-governor's testimony unnecessary.
Zagel several times took Adam to task for repeating questions in cross examination. Once, he asked jurors to leave the courtroom and admonished Adam for asking a witness about having the same last name as a terrorist in the Sept. 11 attacks.
His father acknowledges the risks, but also expresses pride and confidence in his son.
``Absolutely they think 26th and Cal attorneys can't do it,'' he said. ``But the jurors are regular people. Until juries are made up of just lawyers and judges, how can they be sure he can't do it here?''