Lisa Loving of The Skanner News
Published: 25 May 2010 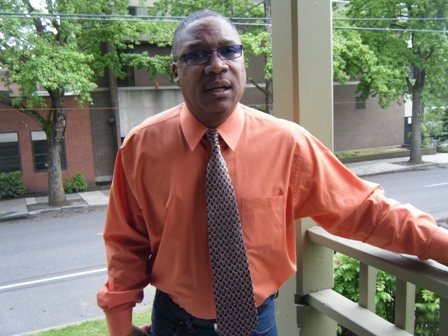 Tyrone Waters, a Gulf War veteran who has battled paranoid schizophrenia – often publicly – since 1995, this week released his first spoken word CD about the events leading up to his shooting by Portland Police during a mental breakdown outside his home in 2001. Recorded in the style of a phone call from the state hospital, the CD is available at Music Millennium and Reflections Coffee and Books. It's titled, "You Would Be Paranoid Too If This Happened to You."
Waters and his mother, retired state Sen. Avel Gordley, were honored with community service awards by the American Jail Association at its Annual Training and Jail Expo, Sunday, May 23, at the Oregon Convention Center. He is currently working as a life coach.

The Skanner News: What is it that prompted you to do this project?

Tyrone Waters: It's something that I wanted to do for quite some time, since being incarcerated I made up my mind that it was a project that I was going to take on and do. And it took me some time to do because of my injuries from being shot by the police in my writing hand. But I was able to get it done. I didn't do it in manuscript form because it was just too difficult to do with my injuries so I opted for a second choice which was to do it on an audio CD, which is how I was able to get it finished and completed this year. 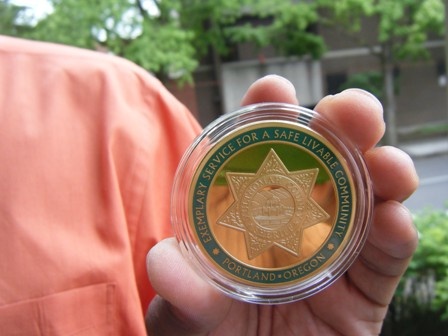 TSN: What is your goal with this project? Are you looking at the other issues that we have bubbling over with law enforcement in this kind of situation?

TW: I'm wanting it to be an educational tool not only for people with mental illness but also for law enforcement, also for the employees that work at the state hospital and the jails so that they can start changing their attitude about how they conduct business and how they treat the mentally ill when they're locked up. So it's got several facets; it talks about schizophrenia and the symptoms of schizophrenia and the different medications that are available out there to treat the disease so that people can live successful lives on medications that work for them. So it's also designed to help remove the stigma associated with mental illness because a lot of people don't understand what it is all about. And really it's a chemical imbalance in the brain and it can be treated with medication and people can live lifelong, just like they can with any other disease like hypertension or diabetes or other common ailments.

TSN: You are a really important person in the community and you come from a family that's really important. I wonder if you have any real specific suggestions you would make right now to city leaders who are struggling with this issue.

TW: Yes. First of all I want to say that when I got out of the hospital in 2006 (soon after the death in Portland Police custody of paranoid schizophrenic James Chasse Jr., which was settled out of court last month). I talked directly to Rosie Sizer at the Chief's Forum and let her know they needed to immediately implement training for officers to deal with the mentally ill in my situation. And that did not happen. Obviously. And so what I'm trying to say is that this type of activity has got to stop and by the grace of God I am still alive and here today. We have to call these officers, these individuals that are controlling our streets and responding to incidents, as well as the employees in the jails and at the state hospital and psychiatric facilities, we have to hold them to a higher standard.
My mom and I were at the American Jail Association Convention Sunday, and spoke out about the shootings that have happened in this town, and sharing my story as well, and my mom also coming forward and saying that she suffers from depression. We asked everyone there to raise their hand if they knew or were related to someone who had a mental illness – there were over 200 people there and every one in the room raised their hand.

TSN: This is such an interesting thing because as we've watched all the police shootings this year, a lot of us here at The Skanner NEWS office, we've thought, you know the police must have a really high rate of stress-related mental health problems that they never talk about – just like soldiers.

TW: They do. They have mental health problems and they're not open about it, it's like a silent taboo in their community, it goes untalked about unless you are someone that's not on the force or in law enforcement that's just out in the community, then it's talked about, then the finger pointing and the blaming goes on. But if you're in law enforcement then it's a hush-hush type of thing. And I think the reason why it's not talked about is because if we actually knew how many officers suffered from some form of mental health problem, what would that say to the community? They would be fearful that they could just lose their job, or that it could ruin their career.