Brian Stimson of The Skanner News
Published: 13 May 2010 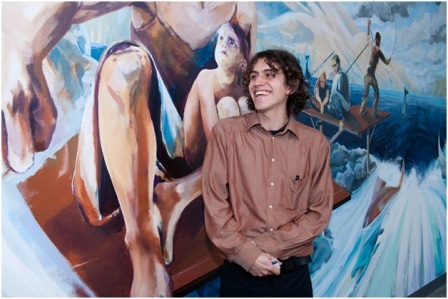 This Saturday, members of the public will have the opportunity to put their artistic talents to one of four murals going up in the Alberta Neighborhood.
Call it a "Paint by Numbers" project on a gigantic scale.
During the Alberta Art Hop from 11 a.m. to 6 p.m. artist Esteban Camacho will be leading three professional artists as well as the public to help paint a 8 ft. by 50 ft. mural that portrays the interior and exterior architecture of buildings in the neighborhood. The mural is being painted on pieces of plywood between Northeast 18th and 19th avenues on Alberta Street.
The finished piece will be mounted on the side of the Community Energy Project building.
A few blocks away, artist Rudy Serna will be assisting artists and volunteers from House of Umoja, Girls Inc. and George Middle School to construct three different murals. Serna said he is trying to develop his image as a community artist.
"I ordinarily work with an assistant, usually a college-age apprentice," he said. "But for this, we're working with some of the seminal organizations of Northeast. It's going to have a lot more community connection with more people."
Serna said the three projects will reflect different facets of the Alberta neighborhood. One will feature cultural figures that act as positive icons for young people; another will honor the previous generation of artists in the area; and the third will be a dated reflection of the old Alberta Street, featuring images of the Cotton Club and the street car.
Hilary Pfeifer, board president of Art on Alberta, says the idea to incorporate murals into her agency's annual Art Hop came when the city-wide mural ban was lifted last year. Pfeifer also wants to remind people what Alberta street is famous for – its artists.
"Last Thursdays have shifted away from art into a street party," she told The Skanner News. "It's our job to maintain that art identity."
If more people – by taking part in the mural paintings – can identify with the paintings on Alberta, more people will feel like a part of the neighborhood.
"I want everyone to feel a part of Alberta Street," she said.
In addition to the mural projects on Saturday, the Alberta Art Hop will feature 15 blocks of car-free streets, more than 150 artists, dance, music and theatre performance.
There will be stages at Binks, Siren Nation, Bitch Media, Radio Room and Destination DIY with a number of ongoing acts and events throughout the day, as well as a variety of vendors.