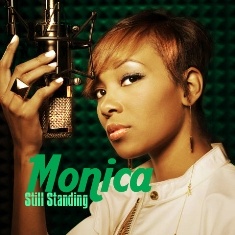 NEW YORK (AP) -- Monica, who debuted at 15 with the multiplatinum-selling CD "Miss Thang," wasn't one who succumbed to celebrity pitfalls as a child star.
But still, she says growing up was hard.
"I experienced a lot of different hardships. The suicide of my first love, the death of my grandmother, the loss of a lot of different things that happened in the public eye that I didn't get a chance to step away and grieve and live like your average person would," Monica, now 29, said.
That's why on her new CD, "Still Standing," you'll hear a familiar refrain from the singer proclaiming how, on the verge of 30, she's fully matured.
"When I say I'm not who I used to be, I mean that some of the things that's happened in my life, they were just consequences to my own actions, me not making great decisions, me not picking the right people to be around and keep in my company," she explained.
Keeping herself grounded not only helped her personal life _ but her professional one too.
"Still Standing," her fifth album, debuted at No. 2 on the Billboard Top 200 albums chart last month, selling 184,000 units its first week, according to Nielsen SoundScan.
"I was surprised to see those numbers. I had no clue," she said.
The success reasserts her standing in the urban music genre. Monica's first-week numbers beat out recently released CDs from top artists like Rihanna, Lil Wayne and Ludacris.
That's in contrast to her last record, 2006's "The Makings of Me." It was a commercial flop, selling about 325,000 units since its release, according to Nielsen SoundScan. In its third week out, "Still Standing" has sold more than 303,000 albums.
"What's relevant to other people doesn't always work for me because (on the) last album I tried something a little different and I should not have," Monica says, referring to the album's lead single, the southern-sounding "Everytime the Beat Drops," which lacked her soulful roots.
"I have to stay in tune with my audience and with my genuine feelings as an artist," she said.
Her latest album's first single, the Deniece Williams-sampled "Everything to Me," is spending its fourth week on top of the R&B charts. She recruited Jamie Foxx for the remix of her next single, the bedroom groove "Here I Am," and she's planning a summer tour with R&B crooner Trey Songz.
"She started so young that today, in terms of the contemporary music scene, she still is young ... (she's) essentially a brand new artist, so there is kind of a freshness there that you may not find with an artist who was big at one point and is coming back," said Skip Dillard, the program director and operations manager at New York's popular R&B station, WBLS-FM/107.5.
What's also helped is Monica's reality show on BET _ also titled "Still Standing" _ connecting the R&B songstress to a younger audience. She says she's in negotiations with the network for a second season.
Now that she's back on the scene, Monica would like to make more albums consecutively, but says she's not sure she won't take years off like she's done in the past.
"My last hiatus was because I had my children two years apart, they're 2 and 4 (years old) now, so they're at the ages where I can step back out and travel," she said, adding: "It just depends on what my life may bring."
But Dillard thinks she should try to capitalize on her recent success to stay relevant.
"If I were Monica's manager, I would recommend she get right back in the studio and continue to crank out the hits," he said.