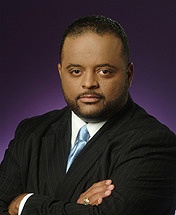 Between Barack Obama's declaring his candidacy for the Presidency and Election Day 2008, Roland Martin filed hundreds of reports about the campaign in his capacity as a political correspondent for CNN and TV-One Networks, as well as a radio talk show host and a nationally-syndicated columnist. Furthermore, Martin was also occasionally afforded access to Obama for intimate, 1-on-1 interviews. So, it only makes sense that he would decide to publish "The First: President Barack Obama's Road to the White House as Originally Reported by Roland S. Martin," a book recounting Obama's historic run for the White House.
Recently, Roland reflected with me about the campaign, the book, his career and his family life.