NEW YORK (AP) - Less than two years ago, Usher was glorifying his evolution as a man with "Here I Stand," a CD that found him celebrating his new role as husband and father while shunning the image of a sexy bad boy unable - or unwilling -to make a lasting commitment. 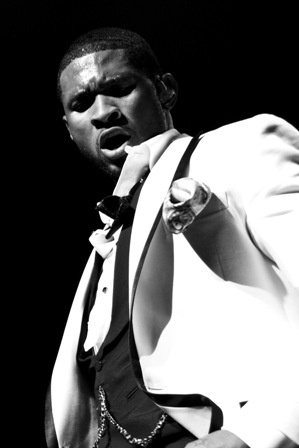 Now, with the release of his latest album, "Raymond v. Raymond," the 31-year-old talks about maturity again. But this time, it comes from lessons learned after disappointment - not only in the discouraging sales of that album, but in the failure of his two-year marriage to Tameka Foster Raymond, the mother of his two young sons.

"Having one of the most sincere moments and occurrences take place in that period of my life, it taught me a lot,'' Usher said one recent day as he reflected on his life in an empty stage room at a Manhattan studio. "It was very beautiful. ... It just simply didn't work. But I never undermine that moment in my life because it's valuable ... and in my life, I try to learn from my experiences."

And his experiences have taught him a lot in a very short period. In 2007, he was still soaring from the 10 million-selling 2004 album "Confessions,'" which firmly established him as a superstar, with such smashes as "Yeah!" and "Burn," when he decided to get married. Stylist Tameka Foster was eight years his senior and had three children of her own.

The elimination of one of music's most desirable bachelors made the union unpopular among his fans. The more serious blow to his career, though, came from his professional priorities. With "Here I Stand," Usher, who had built his career on his appeal as a playboy -- even as a 15-year-old crooner -- decided to focus firmly on family.

While he had a No. 1 hit with the risque "Love in this Club," most of the album's tunes sang about the importance of fidelity, fatherhood, and tenderness-- love songs that promised eternal devotion. It was a complete change from "Confessions," which portrayed a flawed romantic in love with cheating and ending relationships.

The result? "Here I Stand" sold just 1.2 million copies, according to Nielsen SoundScan.

While Usher is careful not to call the album a mistake, he does acknowledge that the material was such a departure that his fans may have had difficulty digesting it.

"I definitely do think having gone from being a very single bachelor to a married father of two children definitely changed the perspective of who I am and what I had to offer," he said. "But then there are those who did recognize it and did understand that there is some great value in that.

"I think it became more of an issue when I went back to what I do as an entertainer. It makes it very difficult to balance those two places, in (the) relationship, and ultimately who you are and what your responsibility is as an entertainer, and what your passion and reality is as a man. And that's where 'Raymond v. Raymond' was born -- that challenge between those two different worlds."

Given the album's first single, the hit "Papers," which was a very thinly veiled look at his divorce, one might have expected ``Raymond v. Raymond'' to detail his tumultuous relationship. Instead, the CD looks to re-establish Usher as the sensual - and single -- entertainer whose life revolves around beautiful girls and clubs, not changing diapers and staying home with a wife.

"Art sometimes imitates life. He's single again. He's having fun, he's back out there, he's back on the scene. So, of course, the music reflects that," said songwriter and producer Rico Love, who co-wrote four songs on the album, including the current single, "Hey Daddy (Daddy's Home)."

But reclaiming his bachelor status may not help Usher regain his "Confessions"-era success. While "Papers" was a No. 1 hit on the R&B charts and singles such as "Daddy's Home" and "There Goes My Baby" have done OK on the R&B charts, he has yet to have a song that has captivated pop audiences like anything on "Confessions," or even "Love in this Club," the first single from "Here I Stand."

He is also facing more competition in the R&B world. Chris Brown seemed to be the next Usher until his assault charge, and Ne-Yo, who has written for Usher in the past, has successfully bridged the urban and pop charts with his silky soul.

While making the record, Love said Usher had a "Rocky"-like attitude.

"It was just a lot of energy. ... He was anxious," Love said. "He felt like he had something to prove. He had his back against the wall."

But Love was quick to point out that he doesn't agree with that notion: "He just has a lot more company. ... He's still the greatest in my book."

It seems Usher feels the same way. When asked if he thinks artists such as Trey Songz or Ne-Yo have had any impact on his sales or audience, he gazed intently and asked, "Do you?"

And as for regaining his mojo, he brushed that off, too.

"I've never lost my swagger -I just put it on pause - and now my focus is definitely at an all time high," he said.