By Brian Stimson of The Skanner News
Published: 01 April 2010 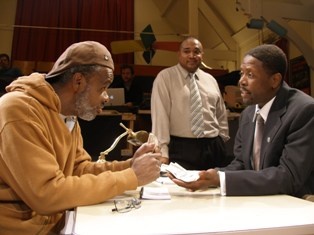 Although August Wilson's final chapter of his Pittsburgh Cycle takes place in the heart of the Steel City, it could easily pass for Portland: A changing Black neighborhood; the force of gentrification threatening the community's culture and history; and forces, Black and White, trying to benefit.


It's only one of the reasons the BaseRoots Theater Company joined with Portland Playhouse to produce Wilson's celebrated "Radio Golf" opening Friday, April 2 and running through April 25.


For two relatively new theater companies, taking on a Wilson play was an ambitious proposal, says Bobby Bermea, artistic director of BaseRoots Theatre Company, but when Playhouse Co-Founder Brian Weaver approached them with the project, the answer was clear.
"It really touches on what BaseRoots is trying to do, what the future holds and what we're trying to create for African Americans in the coming millennium," Bermea said.
When the partnership was formed a year ago, it also appeared that Wilson's works would become a bit of a zeitgeist in town. Wilson's works hadn't been performed since his death in 2004. Portland Center Stage was planning a production, and Bermea had been dreaming of producing his own Wilson play when Weaver approached him for the partnership.

"Sometimes it happens like that, It's the year of August Wilson," said Weaver, who is directing "Radio Golf."
With up to a six month wait for the rights to perform a play, Bermea decided to join with Weaver, who already had permission from Wilson's estate. PCS since dropped their plans, leaving only "Radio Golf" for what could have been an entire "August in Springtime" festival.

Pittsburgh Meets Portland
It's a bit ironic that Portland Playhouse chose "Radio Golf" to produce. The play centers around Harmon Wilks, who dreams of becoming that city's first Black mayor. On this ambitious road, he decides to redevelop the Hill District, a decaying African American neighborhood, and become a major force of gentrification.
Weaver – a White man from Boston and New York – says he's all too aware of the similarities with real estate development in Portland and his own contribution to a changing neighborhood.
"We're some of the young creatives moving into Northeast Portland," he said. "My brother, wife and I, of course we look for the cheapest place to buy a house, we find the cheapest place to find to put on a play and its this church, it's a vacant building. We realize we are actively gentrifying the neighborhood. We're poor. We're artists. We're looking for the cheapest place to live and do art."
But he also loves the neighborhood for its diversity and laments the sometimes homogeneous nature of Portland. So producing a play criticizing gentrification came pretty naturally, he said.
Bermea says the play – set in the late 1990s – allows the audience to contemplate how the Black community can make steps forward, and see the parallels between the past and the present. With millions impoverished, yet having achieved Black leaders in the highest reaches of both government and industry, the community isn't as united as it once was.
"We've bled as much for this country as anyone else has," he said. "Now it's time to give something to our children. This play is about not just what we give to them, but how do we go about deciding what that is. What is the valuable part of Black people that we pass on the ensuing generations that will help them make a better world for themselves."
As with all the plays produced by Portland Playhouse, Weaver hopes his audience is engaged to think critically about the performance. One of the more interesting attributes of the Playhouse theater is the seating. With the stage in the middle, audience members are able to both view the actors and the reactions of their fellow attendees.
"You're not only watching the play, but you're watching other people react to the play," Weaver said. "My hope for the play is that the audience will be evenly divided on whether it's a tragedy or not, whether Harmon made the right decision or not. We ourselves want to wrestle with the meaning of the play, what is the balance between history and progress."
And that – says Bermea – is exactly what BaseRoots Theatre Company is all about.

When BaseRoots first formed, Bermea says he got a lot of skeptical comments from his Black friends.
"Why do you want to do that? People are going to hate it," he said he heard more than one person say. "We were worried. Is everyone just against this idea? "
But they haven't found that to be true.
"We have not found that people are as terrified as having five or six Black people in the room organizing," he said. "It's not as terrifying as advertised. It's not about shutting people out, it's about bringing people in."
The theater community also wants BaseRoots to succeed, he said. IFCC, the Miracle Theater, the Jewish Theatre Collaborative – as well as the Portland Playhouse -- were all offering help and support.
"If we can keep on that kind of roll and become a source for this community to be able to have the same kind of relationship with the rest of Portland, that's the ideal we're reaching for," he said.

'Portland A-Listers
Producing something as rich as an August Wilson play takes a bit of courage, says Weaver.
"It's probably one of the only small companies to do this," he said. "It's a really big play. We have some of the best actors in Portland to pull this off."
Despite its small size, Portland Playhouse attracts as many talented actors as the big performance houses in Portland. Lawrence E. Street (Harmon Wilkes) performed in Portland Center Stage's "Ragtime" last year; both Bobby Bermea (Roosevelt Hicks) and Andrea White (Mame Wilks) of BaseRoots have performed throughout the country on stage and White has appeared numerous times on screen; Victor Mack (Sterling Johnson) has acted for 25 years in companies across America; and Kevin E. Jones (Elder Joseph Barlow) has acted extensively in Los Angeles and San Francisco and appeared in television and film.
"These are Portland A-Listers and they are bringing game," Bermea said. "They're bringing fire and music."
Porltand Playhouse is located at 602 NE Prescott St. A special preview show for $10 will be performed on Thursday at 8 p.m. "Radio Golf" opens on April 3. Showtimes are Friday and Saturdays at 8 p.m. for $19 and Thursdays at 8 p.m. and Sundays at 2 p.m. for $14. Tickets can be purchased on Portland Playhouse's website at www.portlandplayhouse.org or at www.baserootstheatre.org or at the Hollywood Theater, 4122 NE Sandy Blvd. or one hour before each show at the door. Purchase tickets over the phone by calling 503-205-0715.