Janet Jackson: The 'Why Did I Get Married Too' Interview 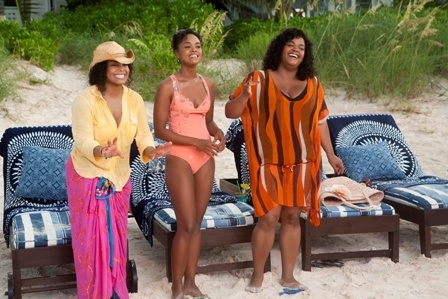 Born in Gary, Ind. on May 16, 1966, Janet Damita Jo Jackson entered show business at the tender age of 7 when she appeared onstage with her already famous elder siblings at the MGM in Las Vegas. This debut, was followed by appearances at 9 on her family's variety show "The Jacksons" which, in turn, led to starring and recurring roles on such hit sitcoms as "Good Times," "Diff'rent Strokes," and "Fame."
At 14, Janet signed her first recording deal. Placing acting on the back burner to focus on her first love, music, she went on to enjoy extraordinary success upon the release of her breakthrough album, Control, in 1986. Over the course of her ensuing musical career, she has thus far accumulated five Grammys, multiple MTV Awards, Billboard Music Awards, and Soul Train Music Awards, to name a few. As an artist, Janet excites, enlightens, leads, and embraces her fans with insights into life's meaning while touching their deepest feelings.
The film Poetic Justice marked this very versatile talent's first foray into acting in feature films, and that was soon followed by a co-starring role in "Nutty Professor II." Janet later received the NAACP Image Award in the Outstanding Supporting Actress category for her work in "Why Did I Get Married." Furthermore, like all of her movies, "Why Did I Get Married" opened up #1 at the box office.
Privately, Janet continues to focus on speaking out and giving back, raising money for charities such as the Cities in Schools and America's Promise. She has also supported the Watts Willowbrook Boys & Girls Club of America, the Starlight Foundation, the Make-A-Wish Foundation, A Place Called Home in South Central LA, the American Foundation for AIDS Research, S.O.S. Children's Villages in South Africa, Cartier's Love Bracelet Program benefiting OCNA and she sponsored an Airlift of Food and Medical supplies to famine-stricken Rwanda. In addition, Janet established the Rhythm Nation Scholarship with the UNCF and has assisted numerous students striving to meet their educational goals.
Most recently, Janet honored her brother Michael's legacy and supported the people of Haiti by joining over 80 artists who collaborated to record "We Are the World 25 for Haiti," the classic 1985 charity anthem re-imagined by Lionel Richie and Quincy Jones to support the earthquake relief efforts. Not surprisingly, Janet has been honored with countless humanitarian awards in response to her dedication to helping others.
Later this year, Janet plans to publish her autobiography, providing an intimate look at her life. Here, she talks about reprising the role of Pat in Tyler Perry's Why Did I Get Married Too, one of those rare sequels which is actually better than the original.

To hear Janet sing "Nothing," the theme song of Why Did I Get Married Too, visit: http://www.youtube.com/watch?v=IpAIHjJh_Gs

To see a trailer for Why Did I Get Married Too, visit:
http://www.youtube.com/watch?v=NSONVGYiIHo