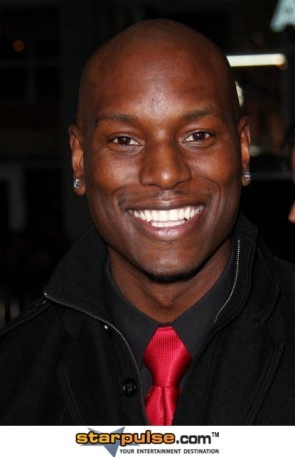 Fresh off the phenomenal success of "Transformers: Revenge of the Fallen," which was the #2 movie at the box office in 2009 (behind "Avatar"), Tyrese is back with another apocalyptic sci-fi adventure. "Legion," however, is a horror flick with a rather novel, religious premise revolving around a struggle to survive the wrath of a vengeful God who has lost faith in humanity.

http://www.amazon.com/gp/product/0316018783?ie=UTF8&tag=thslfofire-20&linkCode=as2&camp=1789&creative=390957&creativeASIN=0316018783
KW: The music maven Heather Covington question: What are you listening to on your iPod?
T: R. Kelly's new album, "Untitled." I have a song on there with him. The album is so crazy, so ridiculous. I've just been listening to that, man.
KW: What advice do you have for anyone who wants to follow in your footsteps?
T: I don't know exactly who I'm talking to, but let me just say that your surroundings can create a better reality for your life. You can often tell how far your life and career will go by the five people you spend the most time with. If you have a problem with your life, you should have a problem with the people in your life. Change your surroundings, and you'll change your life.
KW: Thanks again, Tyrese, and best of luck with Legion, Mayhem and your many other ventures.
T: Okay, bro, I appreciate it.

To see Tyrese in the Coca-Cola commercial that made him famous, visit:
http://www.youtube.com/watch?v=ObdSno1uoQs

To see a trailer for Legion, visit: http://www.youtube.com/watch?v=ejJvnZm7UOY