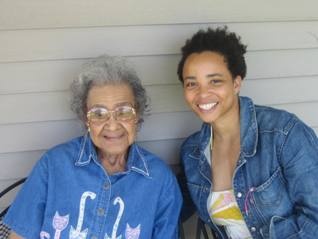 1. "Sugar of the Crop: My Journey to Find the Children of Slaves," by Sana Butler

Who even knew that any children of slaves were still alive? A debt of gratitude is owed to Sana Butler for compiling this bittersweet collection of revealing interviews with the offspring of folks freed by the Emancipation Proclamation well over a century ago. What makes this book special is how seamlessly the author contrasts her aging subjects' fading recollections with her own expectations of them and her intimate reflections about being Black and female in present-day America.
Consider her account of meeting 99 year-old Walter Scott at the Sulphur Spring Baptist Church, which begins: "Mr. Scott was waiting for me in the fellowship hall, sitting at the end of a collapsible picnic table covered with a checkered red-and-white plastic cloth, surrounded by women in white usher uniforms carrying grits and scrambled eggs in black iron skillets. One hand rested on top of his walking cane, the other held a black Bible in his lap."
It's such well-crafted descriptions which elevated "Sugar of the Crop" to the top of the list. Thanks to Sana Butler, a bounty of priceless pearls of wisdom and whimsy have been preserved for posterity via this seminal contribution to the nation's folklore.

2. "Step Out on Nothing: How Faith and Family Helped Me Conquer Life's Challenges," by Byron Pitts

Earlier this year, Byron Pitts became the heir apparent to Ed Bradley's coveted spot on 60 Minutes when he was named a contributing correspondent to the long-running, television newsmagazine. While many might have deemed Mr. Pitts' ascension to the plum position a natural outgrowth of his Emmy-winning work covering such major stories for CBS as the 9/11 attacks, Hurricane Katrina and the Afghan War, the truth is that this talented reporter had to overcome a host of seemingly-insurmountable childhood challenges en route to turning himself into a great success story.
Pitts humbly recounts these admirable achievements in "Step Out on Nothing: How Faith and Family Helped Me Conquer Life's Challenges." The moving memoir proves to be as inspiring as it is sincere, with the potential to serve as a source of motivation for any individual who dares to dream big in the face of overwhelming learning disabilities. Bravo to Byron Pitts for having the guts to go public with such an intimate testimonial to the power of passion and persistence, especially when one has faith in God and strategic help along the way from some loving role models.

3. "Between Good and Ghetto: African-American Girls and Inner-City Violence," by Nikki Jones

The recent murder of an African American honors student brutally beaten to death right outside of his Chicago high school by a mob of fellow teenagers failed to generate as much outrage as one would expect. We've become so blasé about violence in this country that such attacks are taken in stride and nobody notices that the fastest-growing sector of the prison population are black females
Fortunately, Professor Nikki Jones has dedicated her career to understanding and reversing the alarming phenomenon, and the fruit of those labors has yielded this revealing treatise. The author's research led her to the conclusion that, "It is that the battle for respect, dignity, and positive life chances is not one these girls should have to fight on their own." A sobering discourse on the growing problem of social inequality which must be addressed before our rapidly decaying, urban infrastructure turns the prospect of the fall of American Civilization into a culturally-irreversible fait accompli.

4. "Accountable: Making America as Good as Its Promise,"by Tavis Smiley

In 2008, Tavis Smiley took a lot of heat over his reluctance to rubber-
stamp Barack Obama's candidacy simply on the basis of its symbolism as opposed to demanding to know exactly what the victory would mean for black America. Tavis' hesitancy ostensibly came from a reasonable expectancy that Obama would have to deliver on his campaign promises, for his historic win to be of palpable value to the masses of black folks who had turned out in record numbers to support him at a rate of 93 percent.
Now that Barack Obama has proven a disappointment as President, many might look more favorably on Mr. Smiley's effort to hold him accountable to his most loyal constituency. Each chapter of the book delineates Obama's campaign promises in terms of such areas in dire need of attention as health care, education, justice, the economy, and so forth. It also includes checklists to enable the reader to assess whether or not the administration is delivering.
A compelling exercise in truth in advertising designed to keep Obama's feet to the fire.

5. "Brother West: Living and Loving Out Loud," by Cornel West

Everybody knows Cornel West, the public intellectual, the popular
Princeton University Professor and best-selling author who has remained dedicated to the plight of the poor and underprivileged over the course of his illustrious career. Yet few know anything about his private life, or about what has inspired him to remain on such a righteous path and in touch with his roots over the years. At 56, Dr. West has decided to share his life story in this moving memoir comprised of the candid reflections of an uncompromising, compassionate Christian with a functioning conscience and an open heart.

This opus is a collection of letters of support for Michelle Obama designed as a way "to send her a special message, grounded in our common ancestry and in the belief that our daughters have not only been inspired by her accomplishments but empowered by her example." The assorted missives amount to a quite evocative collage of heartfelt correspondence in poetry and prose ranging from the intimate to the light and lyrical.
I found particularly moving the simplicity of Shirley Hanshaw's entry sharing her favorite recipe for Pecan Pie. "I know that you and Barack are not Southern, nevertheless, I thought you might enjoy this dessert. It is always a hit wherever I take it." An impressive compendium of eloquent best wishes which together paint a touching tapestry reflecting the depth of sisters' emotional investment in the First Lady.

7."Down Home with the Neelys: A Southern Family Cookbook," by Patrick and Gina Neely

It's impossible to say what's more appealing about this opus, the authors'
sweet love story, or their succulent barbecue recipes. The back story is that chefs Patrick and Gina Neely had been high school sweethearts, but didn't actually marry until after reuniting in their native Memphis after attending different colleges out of town.
Today, the blissful couple has not only been blessed with two beautiful daughters, but they also own one of the most successful restaurant chains in the country, Neely's Bar-B-Que, with locations in both Memphis and Nashville. Last year, they also started co-hosting their own cooking show on the Food Network, and in response to the series' popularity they decided to share their trade secrets in this practical cookbook attractively illustrated with dozens of mouth-watering photographs. Enjoy!

8. "Family Affair: What It Means to Be African-American Today," Edited by Gil L. Robertson, IV

Although Barack Obama has generated considerable "hope for change," Gil Robertson recognized that most African American communities still exist "in a state of almost perpetual crisis... ... in terms of health disparities, political injustices, crime statistics, and a plethora of social ills." This led him to wonder, how could the country have its first African-American President while the masses of Blacks continue to struggle with so many of the same issues the Civil Rights Movement had attempted to address a half-century ago?
So, the veteran journalist opted to pose the question to a host of prominent black luminaries like Cathy Hughes, Ruby Dee and Congresswoman Carolyn Kilpatrick, and their intriguing responses are the sum and substance of Family Affair. Congrats to the intrepid author for not only figuring a way to take the collective pulse of African-Americana but for distilling the essence of his research into an informative and eloquent cultural tapestry destined to stand the test of time.

9. "Why He Hates You! How Unreconciled Maternal Anger Is Destroying
Black Men and Boys," by Janks Morton

To what do you attribute the underachievement of young African American males? Poverty and the host of woes permeating inner-city ghettos? Absentee fathers and kids being weaned on hip-hop music promoting a combination of materialism, misogyny, anti-intellectualism and Black-on-Black crime?
Weighing-in with a unique slant is award-winning filmmaker Janks Morton who sees the source of the problem as unresolved Black male anger at their single mothers. He addresses the pressing issue head on and in incendiary fashion in a controversial manner certain to generate thought-provoking debate.
The author's embrace of intact nuclear family values might not be everybody's cup of tea, but there's no denying he makes a persuasive case in this timely tome before offering some sobering lessons in tough love aimed directly at baby mamas and their at risk offspring.

10. "African American History in the United States of America: An Anthology," Compiled and Edited by Tony Rose

The typical public school curriculum devotes precious little attention to
the considerable cultural contributions made by African Americans. In fact, most history books divide U.S. citizens into blacks and whites before focusing on Whites to the exclusion of Blacks and other minorities.
However, as Tony Rose astutely observes in the Foreword to this innovative opus, "There is only one race, the Human race… everything else is culture." And he has come up with a novel text teaching U.S. history while dispensing with the terms "Black race" and "White race" altogether.
Well-written and informative from beginning to end, "African American History in the United States of America" is an engaging read that's every bit as entertaining as it is a worthwhile educational tool. Kudos to editor Rose for creating an innovative treatise to help the nation take a significant step towards his ultimate hope and dream "that we can all call one another who we truly are -- Americans."

A transparent take-the-money-and-run rip-off of no substance ostensibly published to cash-in on the president's popularity. The most out of touch offering since last year's worst offering, Shelby Steele's pre-election opus explaining why Obama couldn't win.

Although this much-ballyhooed book arrived with a lot of fanfare
trumpeting it as introducing a new "holistic approach to race," quite frankly, I found it to be a rather blah rehash of old wine in new wineskins. Quite simply, you're actually going to have to come up with truly fresh ideas to earn this critic's stamp of approval as an innovative thinker, Harvard credentials notwithstanding.
Trust me, it's hard find a more vague assessment of the State of Black America than this one by out of touch, Professor William Julius Wilson: "We can confidently state… that regardless of the relative significance of structural and cultural factors in black family fragmentation, they interact in ways far too important for social scientists and policy makers to ignore." Zzzz… Zzzz… Zzzz…

For some reason, actor Hill Harper decided to write a relationship advice book even though he's never been married and freely admits to a checkered past in terms of dating. In this ill-conceived opus, moreover, he makes the tactical error of going public with his private life, relating how "This beautiful Black queen is my great blessing here on earth." And in his concluding chapter, he waxes romantic about their solid future together, despite the odds against long-distance liaisons when one person's on the East Coast while the other lives out in L.A.
Regrettably, the couple has reportedly already called it quits, which makes you wonder why Hill's editors didn't try to talk him out of mixing business and pleasure on the pages of his book, especially given his spotty track record. Sorry, it's kind of hard to take any advice from a bachelor-turned-love guru who didn't see this safe falling from the sky about to land on his head.