Book Review: 'Why He Hates You! How Unreconciled Maternal Anger Is Destroying Black Men and Boys' 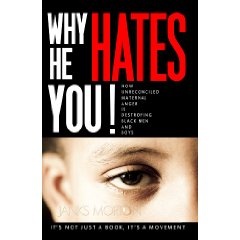 "We have a generation of young black boys and girls coming along in droves that have been raised exclusively by single-mothers... Consequently, it is readily apparent that while some children's antipathy is directed towards non-residential fathers, specifically around issues of abandonment and contact, the person that I see more often than not at the end of this red-hot skewer is the single mother…
My objective in this book is to shake loose things unrecognized. Things that are unacknowledged, repressed, tucked away and buried in a place so deep in your subconscious, you do not even realize they exist, and subsequently do not realize how they influence you…
Understand, as well, I was this very broken man for a long time. This brokenness being the result of not having truthfully and righteously reconciled with both my parents, my rebellion set me on a path of self-destruction. Fortunately, in the end, truth and honesty prevailed, and I hope sharing my story helps you find a way to your own healing."
Excerpted from Chapter One (pages 18, 25 & 28)

Over 10 percent of young African American males are currently behind bars. Meanwhile, the unemployment rate for that same demographic is around 25 percent, and less than half of them are even high school graduates. To what do you attribute the underachievement of this marginalized segment of American society?
Some pin the blame on poverty and the host of woes permeating inner-city ghettos. Others point to absentee fathers and kids being weaned on hip-hop music promoting a combination of materialism, misogyny, anti-intellectualism and Black-on-Black crime. After all, what can you expect of a kid raised on rap videos in which their idols slide credit cards through the anal cleft of obliging females or CDs on which an icon like Kanye West urges his fans to drop out of school.
Weighing in with a unique slant on this statistical imbalance is award-winning filmmaker Janks Morton, director of the groundbreaking documentaries "What Black Men Think" and "Men II Boys." He sees the source of the problem as unresolved black male anger at their single mothers, and he addresses the issue head on and in depth in "Why He Hates You!," a controversial, if very persuasive take on the issue.
Since I was raised by two parents, I'm lucky enough to have never hated my mother. But after reading this text, I could see how a female's inability to influence her boy during those formative years might lead him to morph into a predatory monster by the time he reaches manhood.
Taking no prisoners, Janks comes out guns-ablazing, here, even calling the aforementioned Kanye West on the carpet for his recent doing serious rudeness to Taylor Swift onstage at the MTV Video Music Awards. The author lets the chips fall where they may as he points out that Kanye was himself raised by a flawed single-mom. She apparently had some serious self-esteem issues of her own, including gluttony, pride, envy, greed, laziness, extravagance and wrath which led to her death from complications in the wake of cosmetic surgery.
Mr. Morton sees her son's subsequent misbehavior as a consequence of his not having a male role model around to teach him that "You never do anything to disrespect the family name," "You don't go on TV and make a fool of yourself," and "You never attack the innocent." Janks' embrace of intact nuclear family values might not be everybody's cup of tea, but there's no denying he's certainly crafted a timely tome offering some sobering lessons in tough love designed for both black parents and at risk members of the Hip-Hop Generation.