By The Skanner News
Published: 19 November 2009 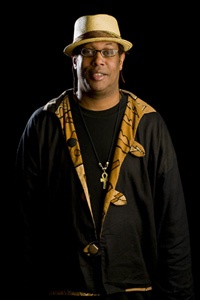 David Ornette Cherry was nominated for the 2010 Portland Music Awards for "Outstanding Achievement in Jazz" by the Jazz Society of Oregon. The awards are decided by a public vote, which can be made at www.musicspectator.com/portland_music_award.
The Internationally known musician and composer hosts a late-night, monthly series titled 'Round Midnight, one Saturday per month from 11:30 p.m. to 1:30 a.m. at Curious Comedy Theater, 5225 NE Martin Luther King Blvd. A portion of the $8 admission supports jazz and arts at Jefferson High School. On Nov. 21 the show features the jazz/funk Quadraphonnes saxophone quartet, four women, sometimes six, with bass and drums, they bring to the stage a powerful and rare show with musical arrangements ranging from Tower of Power to Eric Dolphy.