By Brian Stimson of The Skanner News
Published: 05 November 2009 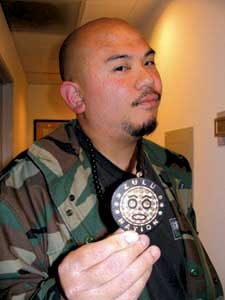 The Universal Zulu Nation has come to Portland.


The newly formed local chapter of the international hip hop culture organization - the 45th Parallel Universal Zulus - is holding a house warming celebration on Friday, Nov. 6 from 6 p.m. to 9 p.m. at their new office at 109 SE Salmon St. Suite C in Portland.
What began as a community organization in New York City in the 1970s by hip hop pioneer Afrika Bambaataa, has now expanded to many corners of the globe. Representing the core values of hip hop culture, Zulus are a mix of DJs, musicians, rappers, artists and others interested in bettering their community through the hip hop lense.
In Portland, the 45th Parallel Zulus first began organizing with the help of Seattle's 206 Zulus in 2005. 45th Parallel leader Mikey Hortaleza, aka DJ GrimRock, says his newly formed chapter is one part of a "family of many tribes."
"We stress the preservation of the culture of hip hop," he told The Skanner. "People misunderstand us as a rap group. Which we're not. It's actually a culture."
Although hip hop culture involves many different elements -dancing, DJing, graffiti art, music - there is only one way to experience what being a part of Zulu Nation is all about.
"You have to experience this," GrimRock says. "Our family is many tribes … different ethnicities, religious beliefs … we invite everyone to come build with us."
While the New York Zulus of the 70s were going through something very different than the 206 or 45th Parallel Zulus, everyone can find a common ground to create something positive out of hip hop culture.
The Nov. 6 celebration will serve as a fundraising event so the 45th Parallel Zulus can obtain 501(c)3 nonprofit status. The event is hosted by RocketOne and features the skills of DJ/MC King TC Izlam, DJ GrimRock, Notes from Underground and Blacque Butterfly. The all ages event is free, but there is a recommended donation of $5 to $25.
Currently, members of the 45th Parallel have been volunteering in afterschool programs SUN schools. They are even holding a hip hop culture class. For more information, visit www.oregonuniversal.org.

High School of Recording Arts Hearing
The formation of the local Zulu chapter comes at the same time that Erica Jayasuriya and others are trying to form the High School for Recording Arts Portland. Jayasuriya faced a barrage of questions from three member of the Portland School Board on Nov. 2 about the school, which promises to incorporate the recording arts - from performance, to album design and marketing, to studio engineering - into a high school curriculum to reach those students who are "falling through the cracks."
School Board members wanted to know why Jayasuriya thought Portland would make a good fit for the arts.
While the teacher thought the need was great and the model reflected the artistic ambitions of the city, her most compelling reason was personal.
After experiencing racism and discrimination at his school, her 13-year-old son told her he wanted to go to a school where he'd no longer be a minority.
"The existing model is a hook to engage youth, the recording arts is a hook to engage students," she said of the school that she hopes would attract disaffected minority youth.
"The way project-based learning works as a theme … it is in advertising, it is in graphics, in awards shows and live shows, our students could be doing pod casting, radio plays, live performances," she told board members. "We have the capacity under the theme to develop based on who comes."
The charter school would be based upon existing models in Minnesota, Los Angeles and New York and would have a capacity for several hundred. The school board is expected to vote on the charter application on Dec. 14.