From The Skanner News and Wire Reports
Published: 29 October 2009 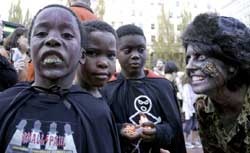 In a special homage to pop music icon Michael Jackson, tens of thousands of dancers around the world gathered simultaneously in public places to perform the immortal steps of the legendary music video "Thriller."
In Portland's Pioneer Courthouse Square, a crowd of about 160 zombies and werewolves spontaneously started their synchronized routine at 5:30 p.m. Saturday, Oct. 24.
The annual "Thrill the World" event has spawned its own community of Jackson enthusiasts that has built over many years – but the 2009 event has been viewed as the biggest ever held.
Thousands of Mexicans claimed they broke the record for most people dancing to "Thriller" simultaneously in one place on Saturday, which would have been Michael Jackson's 51st birthday.
The majority of the fans wore the singer's trademark black fedora, white gloves and aviator shades for the mass re-enactment of the groundbreaking 1983 video in front of Mexico City's Monument of the Revolution. Cheers went up as organizers told the crowd that they "beat it," with 12,937 people putting their best foot forward. 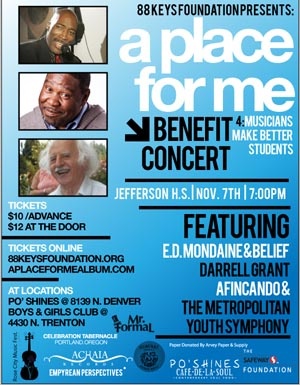 The current record was set in May by a group of students in Virginia, according to the Guinness Book of World Records.
Guinness must now certify whether the Mexican fans really performed the entire, intricate dance routine. It was expected to announce its final decision in a week's time.
Saturday's mass dance in Revolution Plaza had its roots in a Facebook group that was joined by thousands of fans.
Organizers held rehearsals for several Sundays leading up to the attempt, and posted a YouTube video for those who wanted to practice but could not attend in person.
The rainy start to the afternoon failed to deter the fans, who withstood the inclement weather to get in a few final practices with their dance steps before the formal attempt.
The downpour let up in time.
"Yes, there's a lot of chaos," said Viridiana Cabrera, who came dressed in full zombie make-up.
"But the truth is that to be in an event like this one on Michael Jackson's birthday is, well, unique," she added.
Jackson impersonator Hector Jackson said the fans gathered in the capital on Saturday had done Mexico proud.
"We raised high the name of Mexico, that was the best," he said.