By The Skanner News
Published: 24 September 2009 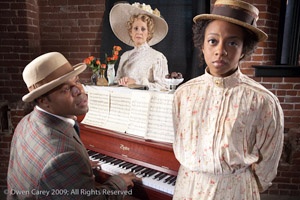 Portland Center Stage invites Portland to return to the turn of a different century for "Ragtime," a Tony-Award winning musical based on the classic novel by E.L. Doctorow.
This sprawling epic is set against the backdrop of the ragtime craze in 1908 New York City, where the fates of three families intertwine: a wealthy White woman and her son, whose lives are shaken up when she takes in a baby abandoned by a young Black woman; a Jewish immigrant father and daughter who find unexpected fortune at the dawn of the motion picture age; and a ragtime musician whose world unravels after a group of bigoted firemen destroy his brand new car to "teach him a lesson" about "appropriate" place in the burgeoning prosperity of a new American century.
Woven throughout are cameos by Harry Houdini, Booker T. Washington, Emma Goldman, Evelyn Nesbit, J.P. Morgan and Henry Ford, the celebrities of the day whose glittering successes and high minded idealism provided the public face of the 20th century American dream while also masking its more private hopes and heartbreaks.
The Script is by Terence McNally, ("Kiss of the Spider Woman"), with music composed by Stephen Flaherty and lyrics by Lynn Ahrens. The novel "Ragtime" by E.L. Doctorow, was identified as one of the hundred best novels of the 20th century by the Modern Library Editorial Board.
The show is directed by PCS Artistic Director Chris Coleman and features local favorite Susannah Mars, who was last seen in Broadway Rose's Evita, and Leif Norby, last seen at PCS in the 2008/2009 Season opener "Guys and Dolls." 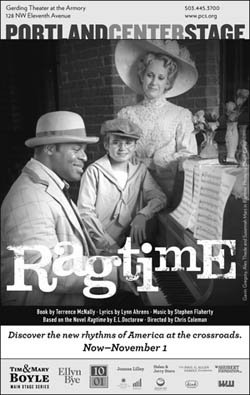