By The Skanner News
Published: 13 September 2009 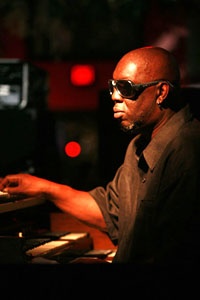 A benefit concert will be held in September for renowned Portland musician Johnny Sanders. The talented keyboardist has been diagnosed with liver cancer.
The benefit will be held from 3 p.m. to 1 a.m. on Sept. 27 at the M&M Lounge in Downtown Gresham, on 5th and Main. Proceeds from the concert will help Johnny with medical bills.
According to fellow musician, friend and event organizer, Lena Braxton, Sanders began his career in the '60s, playing at the famed Cotton Club in Portland, with such acts as Big Mama Thornton, Albert Collin, Thara Memory, Major Lance and The Ballads, among others.
Although Sanders played for many different bands over the years, he is said to be inseparable from his "twin" younger brother Jimmy Sanders, with whom he made music for years. Most recently, the elder Sanders played in Nashville at B.B. King's club.
The Sept. 27 benefit will feature a variety of acts, including music, poetry, dancing and door prizes.
Any musicians or performers wanting to take part in the benefit should contanct Braxton on her email at stll_nelson@yahoo.com or cell 503-704-0267. 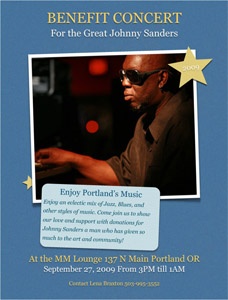