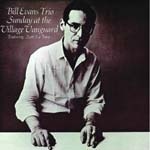 "SUNDAY AT THE VILLAGE VANGUARD"
BILL EVANS TRIO
RIVERSIDE
* * * * *
This is another in the collection of great jazz originally recorded on the Riverside label and produced by the legendary Orrin Keepnews.
How fitting it is that the legendary Bill Evans Trio be an important part of the Keepnews legacy. It was Evans' most famous group with bassist Scott LoFaro and drummer Paul Motian. In fact, the recording made in the afternoon and evening of June 25, 1961 was the last performance by the group. LoFaro was killed in a tragic car crash 10 days later.
It was Evans' desire therefore, when it came to choosing tunes from the gig for this release, that LoFaro's work be featured. We get to hear one of the premier bassists of his time unfettered, free to do what his soul dictates. This is particularly true on "My Man Is Gone" and "Solar" to the point that if one didn't know better, it could be mistaken for a LoFaro led group.
LoFaro's touch while emphatic and strong in tone never has a thumpish quality. Besides Evan's sparkling right hand, it should be noted this trio was a rarity at the time because it was structured to feature the collective trio and not the pianist-leader as most others.

MIKE CLARK
TALKINGHOUSE
* * * * *
Veteran drummer Mike Clark pulled together an outstanding group of jazz players to record this electrifying hard bop release.
The rhythm section of pianist Patrice Rushen, bassist Christian Mc Bride and Clark is the driving force and drive they do. The first two cuts, "In The House," and "Like That" are beneficiary of that terrific section propelling alto saxophonist Donald Harrison and tenorist Jed Levy as well as young trumpet star Christian Scott.
"10th Ave.1957," a minor blues throws the spotlight first on Scott and then Harrison who wails his solo. Billy Eckstine's "I Want to Talk About You" begins with a plaintive Harrison opening solo backed by only the rhythm section for nearly seven minutes before Rushen begins her solo. Harrison returns to close it out. His work on this classic rivals that of John Coltrane.

"OUR DELIGHT"
JAMES MOODY-HANK JONES QUARTET
IPO
* * * *
Two of the most veteran jazz musicians around today, tenor saxophonist James Moody and pianist Hank Jones come together backed by bassist Todd Coolman and drummer Adam Nussbaum for 12 tracks of classic jazz.
Despite their veteran status, Moody's tone is warm and strong and Jones' fingers fly or slow dance over the keys; it's his choice. The two are unencumbered musically by age.
They include such chestnuts as "Body and Soul," "Con Alma," "Old Folks," "Lady Bird," "Good Bait," and lots more. 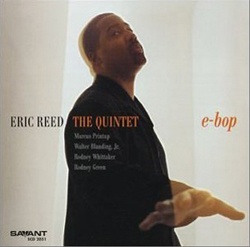 ERIC REED QUINTET
SAVANT
* * * *
This is a first class jazz recording led by pianist Eric Reed, a longtime personal favorite of mine.
It's a nice ensemble with Marcus Printup on trumpet; Walter Blanding, tenor saxophone; Rodney Whittaker, bass and drummer Rodney Green.
"Bouncin' With Boo, Boo" typifies the material with its two horn opening followed by an strong Whittaker take and then a muscular tenor offering by Blanding. Reed contributes a scintillating solo complete with a quote from Randy Weston's "Hi-Fly." A muted Printup follows before a brief brushes stint from Green.
Eight of the 10 tracks are Reed originals. The two exceptions are Elmo Hope's "Le Berthe" and Thelonious Monk's medley of "Evidence" and "Think of One." Reed is more than just successful on the Monk tunes. He imparts the essence of Monk without copying Monk.

Dick Bogle can be contacted at r.bogle@comcast.net