'Blueprints: Hip, for the Open-Minded

"BLUEPRINTS OF JAZZ"
BILLY HARPER
TALKING HOUSE
* * * * *
The first time I ventured into the New York jazz scene was in 1985 and I heard tenor saxophonist Billy Harper perform in Soho loft. I've been a fan ever since.
The warning label is simply this: This is for the very hip but if you fail to qualify, then an open mind and ear are the only prerequisite. The first two tracks feature the poet Amiri Baraka in two lengthy tracings of the history of blacks, blues and jazz and tying them all together.  While Baraka recites, exciting horn solos resonate behind him.  Trumpeter Keyon Harold establishes a majestic presence.
On "Time and Time Again," Harper is king with his muscular solo with pianist Francesca Tanksley following. When Harper and Harold blow together, it's goose bump producing. Once a bass singer in his church choir, Harper challenges "Amazing Grace" by using an overdub of his horn to back the wordless part of his vocal. This is an adventure in wait!

"BLUEPRINTS OF JAZZ"
DONALD BAILEY
TALKING HOUSE
* * * *
With the exception of pianist George Burton, this CD brings together some senior veteran players who have never lost the need to swing.
Drummer/leader Donald Bailey was with Hammond B-3 exponent Jimmy Smith on sessions which produced "The Incredible Jimmy Smith at Club Baby Grand," "Open House," "Midnight Special," "House Party" and "Back at the Chicken Shack."
Tenor saxophonist Odean Pope is a power player and his solo on "Gone Now" with its tonal distortions make an exciting listen. Pope is featured on the next cut, "Variations" as is pianist Burton. It is not a piece for relaxation. Burton's playing is appropriately thick and of course Pope's has a sharpened edge. However, Bailey is strong, driving the soloists in a way that belies his age.
My fave is "Family Portrait." Burton gets to stretch out early as Bailey drives the tempo. Pope takes over for a long and very innovative offering that is heavy in the swing department.

"CARMEN MCRAE LIVE AT THE FLAMINGO JAZZ CLUB"
ACROBAT
* * * *
Even though radio listeners today don't get to hear her as often as her contemporaries, Sarah Vaughan and Ella Fitzgerald, Carmen McRae was right up there with both in her day.
Recorded in 1961 London, England, it marks her first trip abroad. Audience reaction was enthusiastic as she interprets 11 grand standards. She is marvelous on Monk's "Round Midnight," not an easy song to sing. One tune that eventually became closely identified with her, "A Foggy Day," is allowed only 1:44. Talk about economy of scale, wow.
She calls upon pianist Don Abney to join her in duo form on "Don't Ever Leave Me." Some of the other classics include: "Stardust," "Loverman," "They Can't Take That Away from Me," "Moonlight in Vermont" and "Body and Soul." 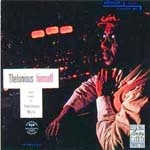 "THELONIOUS HIMSELF"
THELONIOUS MONK
RIVERSIDE
* * * * *
This is Monk uninterrupted except for one track, "Monk's Mood" on which tenor saxophonist John Coltrane and bassist Wilbur Ware are heard.
Monk, seemingly glides from the first two tracks, "April In Paris," and "I Don't Stand a Ghost of a Chance" into the blues. Reportedly upon finishing recording "Functional," he shouted to the engineer's booth, "I sound like James P. Johnson." The similarity is easily recognizable to anyone familiar with Johnson, the famed Harlem stride player.
On the 13 tracks, there are several takes of some songs. "I Should Care," "Ghost of a Chance," and "Functional" all get multiple treatments. His classic "Round Midnight," and my favorite, "I'm Getting Sentimental Over You" are also here.

Dick Bogle can be reached at [email protected].