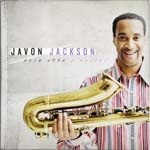 "ONCE UPON A MELODY"
JAVON JACKSON
PALMETTO
* * * * *
This recording by frequent Portland visitor, tenor saxophonist Javon Jackson marks his joyful return to releasing straight ahead jazz music.
His jazz roots which run deep into his time with Art Blakey and The Jazz Messengers have emerged from wherever and as a result we have nine superior compositions executed to perfection by Jackson and his three bandmates.
Eric Reed is his usual excellent self whether soloing or accompanying Jackson. The veteran Billy Drummond and bassist Cameron Holt mean everything when it comes to providing the drive.
Jackson goes old school with the beautiful ballad "My One and Only Love." His warmth and sincerity ring through and true each luscious note to make this one my fave. What follows is a swinging Jackson original, "Mr. Taylor" with Jackson blowing with power and control on the well constructed piece. Reed's solo is a standout.
"Will You Still Be Mine" opens with a tinkling percussion sound and proves to be particularly interesting as Jackson and Reed on their solos play straight ahead while Holt and Drummond are in and out of a Latin groove.

"PERFECT TIMING"
BARBARA KING
CCC
* * * * *
This lady is a blessing and I do not know why we have not heard her before now.
She is young, Black and blessed with a great voice. There is a spiritual message in most of the 11 tracks which tells us a lot about her own heart. Given her talent and age we can all send a shout up that she did not opt for the current hip hop music but instead maintains her traditional jazz roots.
She exercises great taste in her selection of sidemen. On "Overtaken," she uses the fine Brazilian guitarist Romero Lubambo along with pianist Dorsey Robinson, bassist Kenny Davis and drummer Carl Allen.
An ode to current times, "Tryin' Times," a Donny Hathaway composition, is strong with its gospel – soul connection. John Di Martino is on piano; Ray Drummond, bass; Steve Johns, drums; and Rodney Jones, guitar. More Barbara, more! 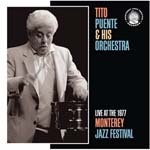 "LIVE AT THE 1977 MONTEREY JAZZ FESTIVAL"
TITO PUENTE
MJF
* * *
Silver haired Tito Puente always added happiness to crowds wherever he led any of his bands.
One can easily imagine his impact on the 1977 Monterey Festival crowd, an already festive event. Here he is with his 13 piece band, plus vocalist Frank Figueroa, leading them through 10 tracks of lively Latin jazz.
The band joins in the vocal on "Oye Como Va," and we get to hear some fine flute by Mauricio Smith. Vocalist Figueroa croons "Deleria" punctuated by the powerhouse brass section. Tenor saxophonist Albert Shikaly and trumpeter Paulo De Paula contribute pretty ballad solos. 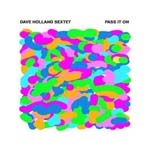 "PASS IT ON"
DAVE HOLLAND SEXTET
DECCA
* * * *
This CD by honored veteran bassist Dave Holland features some brand new arrangements of earlier Holland compositions and recordings.
His sextet is perfect with horn players Antonio Hart, Robin Eubanks and Alex Sipiagin. One of jazzdom's greatest pianists, Mulgrew Miller is aboard along with drummer Eric Harland. The combination of saxophone, trombone and trumpet opens the door to creative arrangements using all sorts of horn voicings.
There are two new tunes, "Fast Track," based on the changes from "The Man I Love" and the title track, "Pass It On," a mood elevating swinger.