"ACROSS THE CRYSTAL SEA"    DANILO PEREZ & CLAUS OGERMAN    DECCA
* * * * *
This is a classic jazz album both in  its compositions and their articulation by some of the world's best musicians.
Grammy winning pianist Danilo Perez combines his piano mastery with conductor and arranger Claus Ogerman for eight tracks of superlative music.  Backing them up is a rhythm section of bassist Christian Mc Bride and drummer Lewis Nash.
Vocalist Cassandra Wilson performs the disc's only standards; "Lazy Afternoon" and "All of a Sudden My Heart Sings."  The other tracks are Ogerman's and are based on classical themes thus utilizing the lush string section.  In addition to his original composition, "Another Autumn," Ogerman uses themes written by Sibelius, Rachmaninoff, Massenet and others.
Tony Li Puma, world renowned producer, produced this sure fire winner.

SARAH VAUGHAN & THE WOODY HERMAN ORCHESTRA
ACROBAT
* * * * *
I hesitate to venture a guess as to when the great vocalist Sarah Vaughan reached her artistic peak.  That said however, I doubt she ever sounded stronger or more pure voiced than in 1963 when this was recorded.
Not intended for the commercial market, this was made as part of a public service series of radio transcriptions called "The Guard Sessions," sponsored by the National Guard for recruitment purposes.
This combination of Vaughan and the Herman band really works.  The band was one of the few top bands in the land.  Its' treatment of Lionel Hampton's "Midnight Sun" and Ellington's "Don't Get Around Much Anymore" are excellent.
Ms. Vaughan kicks it off with a stirring take of "Day In, Day Out."  Her version of "The More I See You" is priceless with its tonal purity and vocal inflections.  She is also heard singing "On Green Dolphin Street," "I'll Be Seeing You," " Just One of Those Things," "But Not for Me," " I Cried For You," and "Poor Butterfly."
Along with all this fine music, there are plugs to join the National Guard which today seem a little hokey. 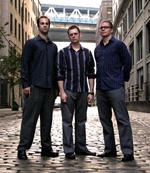 "CAPITOL DINER VOL I"    THE WEE TRIO    BIONIC
* * * *
What a wonderful mix of music for those with eclectic taste by three very talented musicians.
They lead off with a tune composed by the late Kurt Cobain of all people.  "About A Girl" is easily translated from rock to jazz by vibist James Westfall, bassist Dan Loomis and drummer Jared Schonig.  "We See" by Thelonious Monk swings with Loomis getting in a nice bass solo.  The standard, "There is No Greater Love" is cast into a minor mode and allows the trio to take some wild but tasty liberties with the theme. 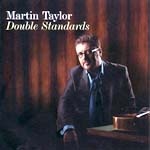 "DOUBLE STANDARDS"    MARTIN TAYLOR    GUITAR
* * * *
This very fine Scottish guitarist was here in Portland last week a the Aladdin theater and those who missed it have some catching up to do.
Listeners to this recording will be treated to a true international star.  This, his latest release, reflects various stages of his life.  For example "Drop Me Off in Harlem" and "Jive at Five" recall 1978 and some of his earliest performances.
In recording this, he overdubs, so you are hearing him accompany himself…..thus the title "Double Standards."  The 12 tracks are loaded with soothing versions of "Alfie,"  "Someone to Watch Over Me," "Bluesette," " I Fall in Love Too Easily" and more.