Recalling Classic Broadcasts of the Miles Davis All Stars 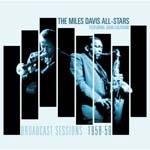 "BROADCAST SESSIONS 1958-59"
MILES DAVIS ALL STARS
ACROBAT
* * * * *
These 10 tracks represent four separate dates recorded for radio and television broadcasts in 1958-59.
It's vintage Miles Davis as he works with both his quintet and sextet. That means we get to hear tenor saxophonist John Coltrane; Cannonball Adderley, alto saxophone; Red Garland, piano; Paul Chambers, bass; and Philly Joe Jones on drums on tracks five through seven. Those tunes are "Straight No Chaser," "Sid's Ahead," and "Bye, Bye Blackbird." My fave from that group is "Sid's Ahead."
The first four cuts; "Four," "Bye, Bye Blackbird," "Walkin'" and "Two Bass Hit" were recorded at Café Bohemia in New York and feature Bill Evans on piano.
Track 8 is "What is This Thing Called Love" and is a real gem with both Cannonball and Nat Adderley, trombonist Bennie Green, baritone saxophonist Gerry Mulligan, pianist Red Garland, drummer Barry Miles and percussionists; Chris Nirobe and Candido.
The last two cuts, recorded at Birdland, "Bag's Groove," and "All of You," add drummer Jimmy Cobb to Cannonball, Coltrane and Chambers. Everyone included is in top form, therefore it is a five star treat to hear these jazz giants together working with master Miles. 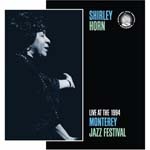 "SHIRLEY HORN AT THE 1994 MONTEREY JAZZ FESTIVAL"
MJF
* * * * *
Vocalist-pianist Shirley Horn tames a sometimes boisterous crowd at the 1994 Monterey Jazz Festival with her supreme mastery of the ballad.
Forget the first tune, the up tempo "Foolin' Myself," which cut off her first words. She became an enchantress on Burt Bacharach's "The Look of Love" making great use of the pause. There are two songs that are among the most moving recorded by anyone at anytime. They are "LA Breakdown And Take Me In," a plea from a loser in life and the second, "A Song for You," with which she creates an intimate connection with her audience.
This is the best example of the definition of a song stylist. A style that never over powers the material but instead draws from it the honest emotion of the lyric. 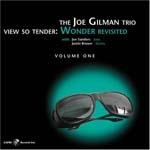 "VIEW SO TENDER: WONDER REVISITED"
JOE GILMAN TRIO
CAPRI
* * * *
The name Joe Gilman, the leader and pianist on this fine recording, is one to remember in the coming months and years.
Gillman applies his creative juices to a jazz interpretation of some of Stevie Wonder's pop library. It's amazing how well they fit in the jazz genre. Gilman is backed by young musicians, bassist Joe Sanders and drummer Justin Brown.
Many jazz fans are not likely to remember Wonder's tunes as he performed them but they should recognize Gilman's chops and those of Sanders, his bassist. Some of the tunes include "Cryin' Through The Night," "Don't Know Why I Love You," "You and I," "Bird of Beauty," and more.

"THE NATURE OF THE BEAT"
WAYNE WALLACE
PATOIS
* * * *
The call to dance or just be happy resounds from the horns, the rhythm and the voices on this fabulous Latin big band release.
Leader and trombonist Wayne Wallace has assembled a great group of players who seem intent on making your day or night very special. They lead off with a Latin funk piece, "Mis Amigos" with a Spanish language vocal by Orlando Torriente.
Wallace supplies a contrast with his emotional trombone statement on the ballad "Besame Mucho," said to have been written by Consuelo Velazquez before her 16th birthday. The Ray Charles soul hit, "Unchain My Heart" undergoes a successful Latin transformation complete with vocal by Ron Stallings with backup singers.
Wallace's broad brush sweeps up Gerry Mulligan's classic bebop composition "Jeru" and gives it a Latin sensibility. This album is most enjoyable.