Surrounded by Legends, Garrett Relives His Past 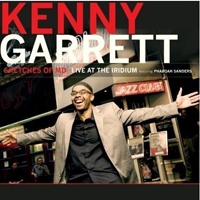 "SKETCHES OF MD LIVE AT THE IRIDIUM"
KENNY GARRETT
MACK AVENUE
* * * * *
Poll-winning, award-winning alto saxophonist Kenny Garrett seems to never be satisfied to stand still and bask in glories past, even those of only a couple of years ago.
This recording centers around sidemen like John Coltrane and Garrett himself, who worked in various Miles Davis groups. In fact, the opener, "The King," evokes Coltrane's classic " A Love Supreme." It's clearly evident and it is beautiful. The repetitive beat is dead on "A Love Supreme." Saxophonist Pharoah Sanders joins Garrett along with pianist Benito Gonzalez, bassist Nat Reeves and drummer Jamire Williams.
"Intro to Africa" is a gospel-tinged reflection of Black history and was written originally to be part of a suite Garrett will record in the near future.
Garrett says, "Sketches of MD" (Miles Davis) puts the listener in a "funk trance" and takes you from the Serengeti to the Solar System. Garrett is intimately familiar with Davis having worked with him the last five years of Davis' life.
The seriousness of the previous tracks seems to disappear when the band gets funky with first "Wayne's Thang" and then "Happy People." In reality, this CD has double appeal, as a listening piece and certainly the last two cuts are great for dancing. 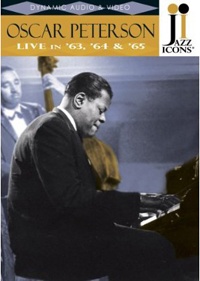 "OSCAR PETERSON LIVE '63 '64 '65"
DVD
JAZZ ICONS
* * * * *
It's a toss up between Art Tatum and Oscar Peterson as to who is the best jazz pianist until now.
This video release of three European concerts with stalwart musicians, bassist Ray Brown, drummer Ed Thigpen and trumpeters Roy Eldridge and Clark Terry is proof positive of Peterson's prowess.
The 1963 Swedish concert is first as Peterson begins with "Reunion Blues," a swinging up tempo blues. He slides into "Satin Doll and uses his right hand with spectacular results. The camera work, as in all Jazz Icon releases, is right on zeroing in on the soloists. We get an up close look at bassist Ray Brown's right hand plucking his bass strings. Trumpeter Roy Eldridge gets some extended solo time on a medium tempo version of "But Not for Me."
In the 1964 Danish concert, "C Jam Blues" is my highlight choice. Peterson opens with a long intro with the barest of rhythm accompaniment and then all of a sudden he opens up with its familiar theme to heavy applause.
The 1965 Finish concert is great as well with no duplication of tunes on previous tracks. They include: "Yours Is My Heart Alone," "Mack the Knife," "Blues for Smedley," "Misty" and "Mumbles," featuring Clark Terry. 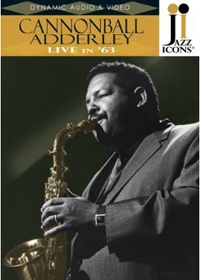 "CANNONBALL ADDERLEY LIVE IN '63"
DVD
JAZZ ICONS
* * * * *
By the time the members of this band had either passed away or took some form of retirement, each and every one of the six had become jazz superstars and legends.
Julian Cannonball Adderley was the leader and alto saxophonist. His influence can be heard today in the playing of Jeff Clayton, a member of the Clayton Brothers band. Julian's brother, Nat Adderley, is on cornet. A grand extra horn voice comes from tenor saxophonist Yusef Lateef who also is heard on flute and oboe. His treatment of "Angel Eyes" on flute is gorgeous and a superb balance to the hard blowing opener, "Jessica's Day" which preceded it.
The all-star rhythm section has Joe Zawinul on piano; Sam Jones on bass; and Louis Hayes on drums. These men and their music are heard in two concerts: Switzerland and Germany in 1963. The video is excellent black and white cinematography.
Not many jazz ensembles use an oboe. However, here Lateef is exquisite on "Brother John" from the German concert. Nat Adderley's cornet solo reaches some unbelievably high notes on this somewhat somber offering.
Each tune is performed to perfection and includes "Jive Samba," "Bohemia After Dark," "Trouble in Mind," "Dizzy's Business," "Work Song," and "Unit Seven."