Despite the Years, Evans' Concerts Are Gold 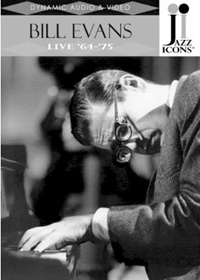 "BILL EVANS LIVE '64-'75"
DVD
JAZZ ICONS
* * * * *
This excellent and dynamic video is part of a series of European jazz concerts by legendary American artists on the Jazz Icons label.
Pianist Bill Evans, even today, remains the favorite of many knowledgeable jazz listeners. The disc contains five concerts performed in Sweden, France and Denmark. The first is in 1964 in Sweden. Evans plays a gorgeous "My Foolish Heart" and "Israel." On those tracks, he works with bassist Chuck Israels and drummer Larry Bunker.
The next performance is in 1965 France. What a treat it is. One of the reasons is that we get to hear and see one of the world's greatest bass players, Niels Henning Orsted Pedersen, saxophonist Lee Konitz and drummer Alan Dawson. Only two tunes again however: "Detour Ahead" and "My Melancholy Baby" are offered with astounding up close and personal camera views of both Pedersen and Evans.
Evans returns to Sweden in 1970 with bassist Eddie Gomez and drummer Marty Morrell. Shifting from the stark, black and white photography of the previous concerts to a bright-colored video presentation, the photographer manages to give us what the eyes of the audience would follow. During part of the second tune of this set, "'Round Midnight," the camera abandons the club and goes outside for night time street scenes. It's tasteful and not overdone.
Evans plays much of the time with his head low over the keyboard, head veins extended, a picture of quiet intensity. Other tunes in the '70 Swedish concert are "If You Could See Me Now," "Someday My Prince Will Come," "Sleepin' Bee," "You're Gonna Hear From Me" and "Re: Person I Know."
Evans and the same crew return to Denmark in 1975 for a five tune set including "Blue Serge," "But Beautiful," "Screen Jurer," "Up With The Lark" and "Twelve Tone Tune Two."
Bill Evans' use of impressionist harmony, his inventive interpretation of traditional jazz repertoire, and his syncopated polyrhythmic melodic lines have made him a major influence on a whole new generation of pianists. 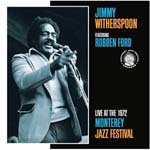 "LIVE AT THE 1972 MONTEREY JAZZ FESTIVAL"
JIMMY WITHERSPOON
MJF
* * * *
Powerhouse blues singer Jimmy Witherspoon got the crowd roaring and whistling right off the top at the 1972 Monterey Jazz Festival with his rendition of "I'm Gonna Move to the Outskirts of Town." From then on, he owned them.
Backed by Robben Ford on guitar and alto; Paul Nagel, fender Rhodes piano; Stan Poplin, bass and drummer Jim Baum, Spoon shouts, pleads and warns his way through tunes he helped make classics.
Some include "Kansas City," "Ain't Nobody's Business What I Do," "I Want a Little Girl," "Early One Morning," and more. There's a bonus track, "When I Been Drinkin'" with guests Coleman Hawkins, Ben Webster, Woody Herman and Earl Hines.
If you love the blues, this will more than satisfy! 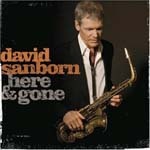 "HERE AND GONE"
DAVID SANBORN
DECCA
* * * * *
There is far more to saxophonist David Sanborn than the prototypical, smooth jazz player that some "real" jazz fans love to cast him.
On this, his latest on Decca, Sanborn dips deep into the blues for some chestnuts backed by some stellar jazz and blues musicians and singers. For example, Christian McBride is on bass; Russell Malone on guitar; Lew Soloff and Nicholas Payton on trumpets. Some other big names are here too. Eric Clapton vocalizes "I'm Gonna Move to the Outskirts of Town" and the young British soul singer, Joss Stone delivers the goods on "I Believe to My Soul."
Sam Moore, former lead vocalist in the Sam and Dave duo is featured on the closer "I've News for You." His voice rises above the power of the fantastic big band Sanborn assembled.