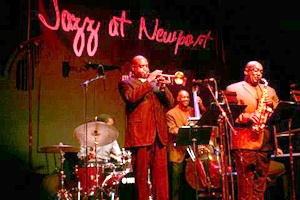 The 2008 Jazz at Newport Festival was an astounding success in all ways.
Sold out evening shows were the norm and there were some excellent performances. The Clayton Brothers Quintet was the most compelling with its hard, bop-driven sets. The group, modeled closely after Cannonball Adderley's Quintet, is comprised of leader-bassist John Clayton; his early 20-something son, pianist Gerald Clayton; alto saxophonist brother Jeff Clayton; trumpeter Terrell Stafford; and the young drumming phenom Obed Calvaire.
The band performed selections from their upcoming release "Brother to Brother," which honors famous jazz playing brothers like Cannonball and Nat Adderley and Elvin, Hank and Thad Jones. Their performances were greeted with standing ovations.

There were a pair of disappointments. Hammond B-3 organist Atsuko Hashimoto failed to swing and left all that to tenor saxophonist Houston Person. Person seemed freer in a late night set accompanied by piano, bass and drums.
Singer Kevin Mahogany, never a fave of mine, sang only one ballad, failed to finish his notes and was a fashion disaster. He appeared on stage in an ill-fitting T shirt, sport coat and slacks that were worn and out of sync. His glasses were down on his nose, on a face with a scraggly beard. No polish on him nor his music.
But some folks loved him. I didn't.

"STARTING HERE, STARTING NOW"
SHIRLEY NANETTE
KMHD
* * * * *
When you think of Portland female singers, two names immediately come to mind.
One is Shirley Nanette, a poised veteran of the jazz and blues scene. On this latest Nanette 12 track release, she sings mostly standards but stays away from the trite and over done. Prime example; "Be Anything, But Be Mine." She reaches deep within herself to deliver the pleading lyric with her heart and soul. She embellishes it a bit with some soul phrasings.
She makes "Sunday in New York" a very special tune, swinging it, scatting a chorus and exercising her range. There are no weak tracks here. Nanette includes such chestnuts as "I Cried for You," "That Old Black Magic," "Exactly Like You," "I Wanna Be Loved," "If I Had You," and more.
She has great backup from her band which includes pianists Tony Pacini and Brian Ward, guitarist Dan Balmer, bassist Ed Bennett and Mel Brown on drums.

"VIBE PERFECTION"
JAMIE DAVIS
UNITY
* * * * *
If big-voiced baritone singer Jamie Davis keeps this up, he will become as familiar to the listening public as are the songs he sings so eloquently on "Vibe Perfection," his latest on his own Unity label.
Davis combines his excellent phrasing with his natural voice and a great set of arrangements designed to enchant. He opens with a set of three standards; "Blue Skies," "Pennies from Heaven," and "The Look of Love"  before shifting to a hip "If You Want Me to Stay." He reached back in time for the old R&B hit, "I'm Gonna Move to the Outskirts of Town" and did it convincingly.
Thelonious Monk's "Round Midnight," not an easy song to sing correctly, is done up in fine style by Davis at a medium tempo clip. An unidentified trumpet player plays an all too brief solo. Davis reprises the famous Lionel Richie classic "Hello," and turns it into a sultry offering of love.
If you liked Eckstine, Prysock and Joe Williams, you will like Jamie Davis.

"JAMMIN' UPTOWN"
ALVIN QUEEN
JUST A MEMORY
* * * * *
If one simply puts this CD in the changer and plays it without a glance at the liner notes, you could think this was recorded last week.
Truth be told, this was recorded in April 1985. The first tip came when the notes claimed Terrence Blanchard was the musical director of Art Blakey's Jazz Messengers.
"Jammin' Up Town" has strong rhythmic feel due mainly to the leader, drummer Alvin Queen and bassist Ray Drummond. The late John Hicks on piano along with Blanchard, tenor saxophonist Manny Boyd and trombonist Robin Eubanks earn it five stars.
Blanchard is full of energy as he lets loose with bursts of fire power. Boyd and Eubanks provide the same on "After Liberation." It's all Queen for 7:23 on "Hear Me Drummin'," on drums and percussion. Finally, on track six, there is a ballad, "Resolution of Love," a pretty tune where Eubanks gets to stretch out. This is great jazz recorded by musicians deserving a real hearing.