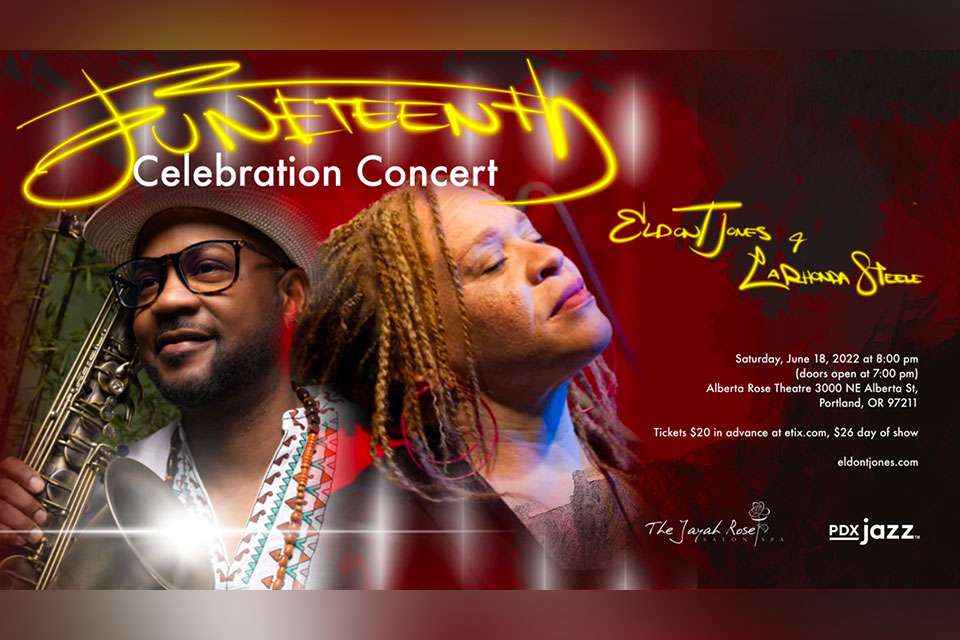 Juneteenth is a federal holiday that celebrates the anniversary of the June 19, 1865, announcement  by Union Army General Gordon Granger, proclaiming freedom for enslaved people in Texas, which was the last state of the Confederacy with institutional slavery. Jones and Steele have curated songs drawing from all African-American musical art forms, and their performance will evoke the joy of emancipation that slaves experienced in 1865.

A World Arts Foundation Lifetime Achievement Award winner, Eldon T Jones and his heartfelt saxophone playing captivate audiences throughout Portland. His 2021 single “T’s Jam” peaked at No. 54 in its 16-week run on the Smooth Jazz Network Top 100 and hit No. 4 on the Billboard Smooth Jazz Most Added chart. Jones recently signed a recording contract with smooth jazz record label Side 2 Music, with another radio single “Captured by Love” set to release before the Juneteenth Celebration Concert.

Oregon Music Hall of Fame inductee LaRhonda Steele, a blues and gospel singer and songwriter, is recognized as one of the region's best rhythm and blues vocalists. She has been dubbed “The First Lady of Portland Blues”—a title of leadership of which she is very proud. She leads the LaRhonda Steele band and the Portland Interfaith Gospel Choir.