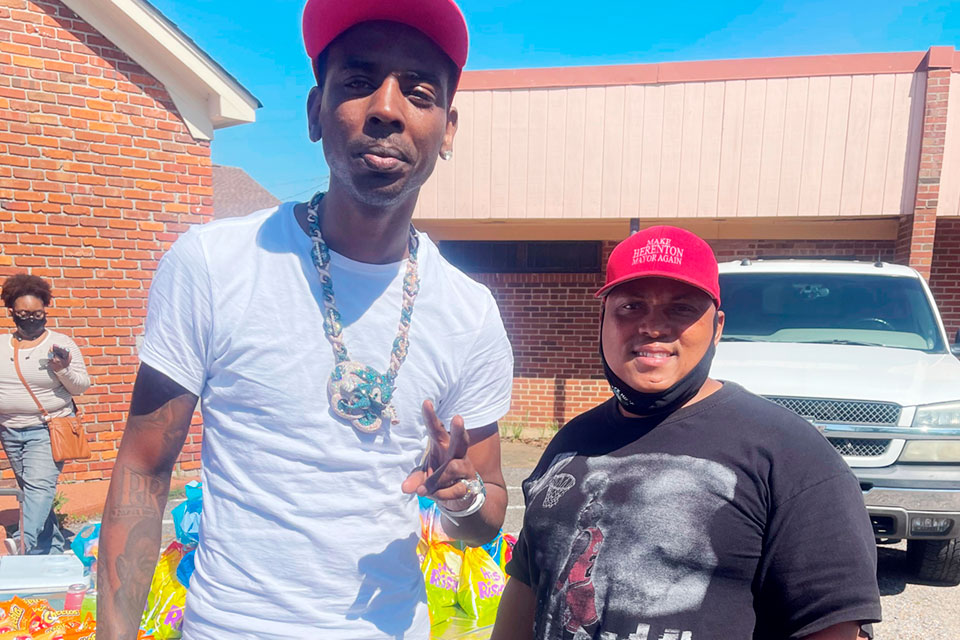 MEMPHIS, Tenn. (AP) — Two days before he was gunned down while buying cookies at his favorite bakery in Memphis, Tennessee, rapper Young Dolph visited a cancer center where a relative had received treatment.

The 36-year-old who grew up on the Memphis streets was in town to hand out turkeys at a church and other locations ahead of Thanksgiving. He stopped by West Cancer Center in the Memphis suburb of Germantown on Monday, spending time with clinical staff and thanking them for compassionate care given to a relative, the center said in a statement.

Return trips like this one had become common in his life, which ended Wednesday when he was shot multiple times inside Makeda’s Cookies, a popular bakery owned by a Black family and known for tasty butter cookies and banana pudding. The gritty southern city where Young Dolph grew up helped him forge the material that fueled his influential career in the hip-hop world — and was ultimately where his life was taken from him.

“Our associates were deeply touched by his sincerity and effort to extend such gratitude,” the cancer center's statement said. “During his visit, Dolph explained that he would soon venture to donate turkeys to the Memphis community at a variety of community centers across the city before Thanksgiving — which is yet another testament to his gracious heart.”

Police continued to search for suspects in the killing, which shook Memphis and shocked the entertainment world as another senseless act of gun violence against an African American man. Police on Thursday released photos taken from surveillance video that shows two men exiting a white Mercedes-Benz and shooting Young Dolph before fleeing.

Since his killing, social media has been filled with messages of respect and love for the rapper, whose music discussed drug dealing, street crime and his crack-addicted parents alongside hard-earned lessons of strength and perseverance in the face of difficult circumstances. His legacy as a fiercely independent artist and businessman was cemented in the hip-hop universe. 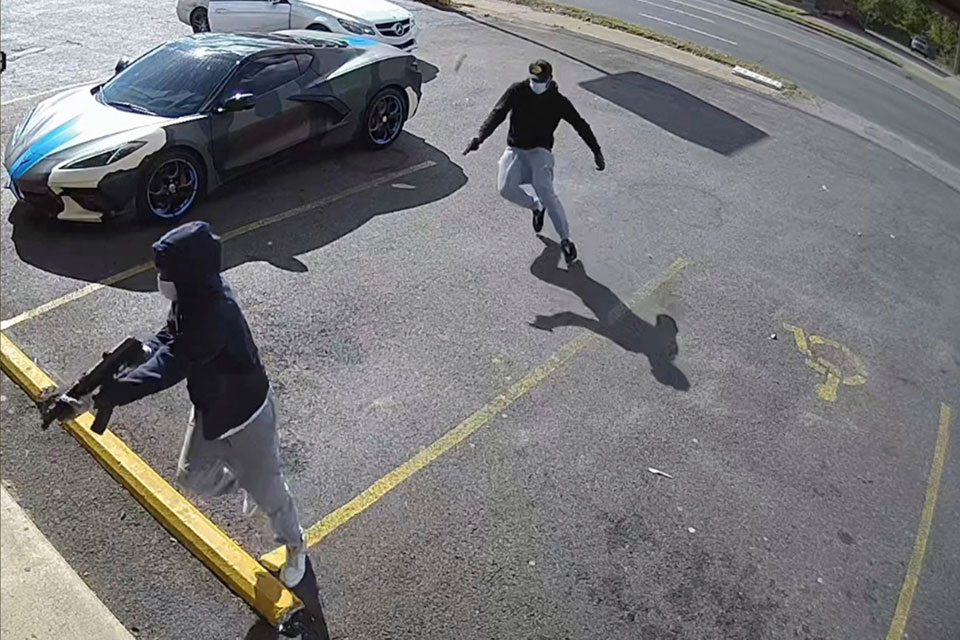 This video image provided by the Memphis Police Department, show two people with guns drawn after leaving their vehicle, a white Mercedes-Benz, who authorities say are involved in the shooting of 36-year-old rapper Young Dolph on Wednesday, Nov. 17, 2021. Police have scoured the city of Thursday as they searched for suspects. (Memphis Police Department via AP)

His acts of charity galvanized his reputation in Memphis, a city dealing with poverty, gun violence and disproportionately high incarceration rates of Black people. In 2020, Young Dolph donated $25,000 to Hamilton High School for new sports equipment at his alma mater.

Earlier this year, he visited children on the day before Easter at St. James Missionary Baptist Church. There, he met Pastor Rodney Herron, who asked him to return to the modest church to hand out turkeys to families before Thanksgiving.

The rapper happily agreed and was planning to hand out the food on Friday. Despite his death, the event will go on, Herron said.

“This is a nice young man, he was down to earth,” Herron said. “I am distraught, because I knew what the young man was doing for the community, how far he was going to go in the community. ... He came back to where his heart was, and he always gave." 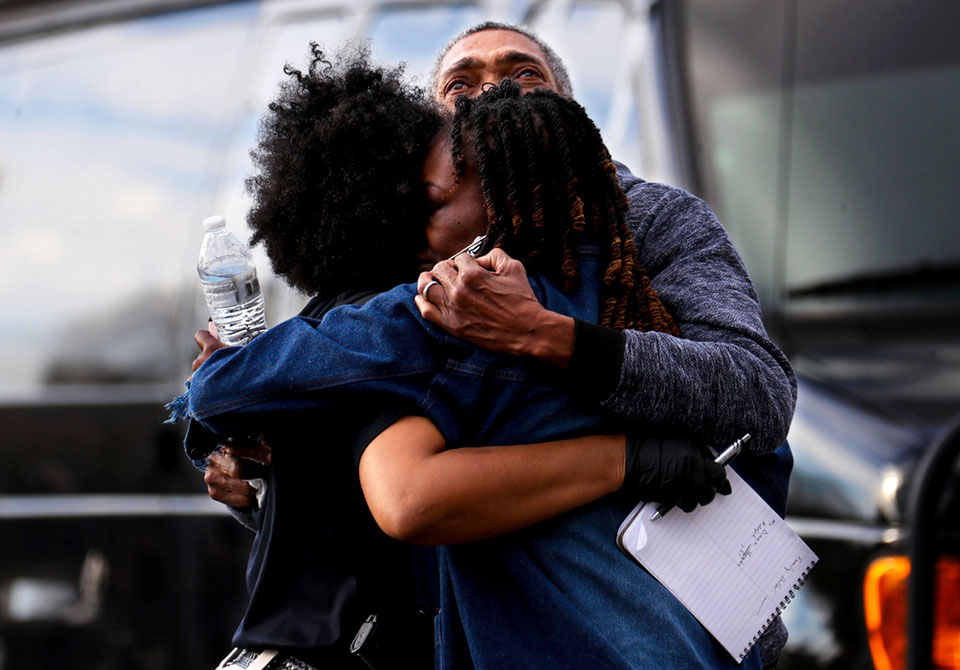 A Memphis police officer hugs the family of rapper Young Dolph after he was killed outside of a store in Memphis, Tenn., Wednesday, Nov. 17, 2021. Young Dolph, widely admired in the hip-hop community for his authenticity and fierce independence, was shot and killed Wednesday at a cookie shop in his hometown of Memphis, Tenn., authorities said. (Patrick Lantrip/Daily Memphian via AP)

Herron said Young Dolph had discussed buying a local community center. Herron said he wants to push to rename the center after the hip-hop artist.

The rapper also was scheduled to attend a holiday event for children of incarcerated parents at a church in December, said Tameka Greer, executive director of Memphis Artists for Change.

“His generosity knew no bounds,” she said in a statement. "Young Dolph didn’t deserve to die, and neither do the children, youth, and adults who lose their lives to gun violence every day."

“The streets know me, everyone already knows who I am,” he said in a 2014 interview with VICE. “Real respects real, so if you can get Memphis to love you, you have to have something real there. Memphis doesn’t just support anybody.”

Like the Los Angeles rapper Nipsey Hussle, who was killed in 2019, Young Dolph pursued an independent approach to the music business. His Paper Route Empire label retained control over his music.

Fans have descended on the cookie shop, where a memorial of balloons and stuffed animals steadily grew in front of the store's boarded up windows. Makeda's Cookies issued a statement saying its owners are heartbroken by the death of Young Dolph, who recently appeared in an Instagram post promoting the store. 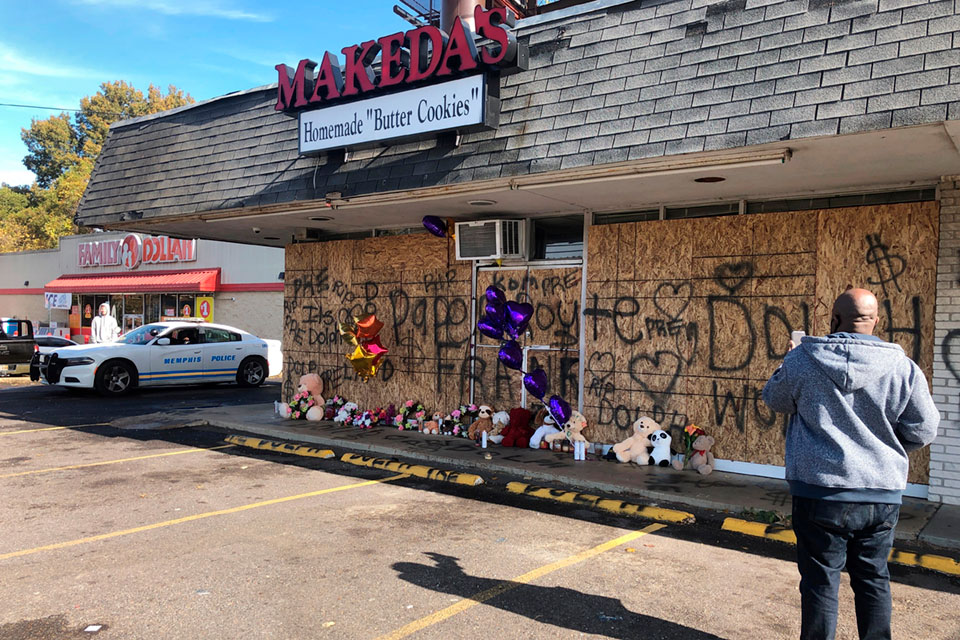 A memorial to slain rapper Young Dolph sits in front of the boarded windows at Makeda's Cookies on Thursday, Nov. 18, 2021, in Memphis, Tenn. Police said Young Dolph was fatally shot inside the popular Memphis bakery on Wednesday. (AP Photo/Adrian Sainz)

Smoking a cigarette outside the store, Marquize Brand, a 31-year-old Memphis native, said he used to visit the cookie shop as a boy with his grandmother and still does today. Brand said he was disgusted by the rapper's killing.

“It's really sour for the worst to happen, and you're trying to do the best you can, with the best heart,” Brand said. “I heard stories about how good Dolph was to people. Why get rid of good people?”