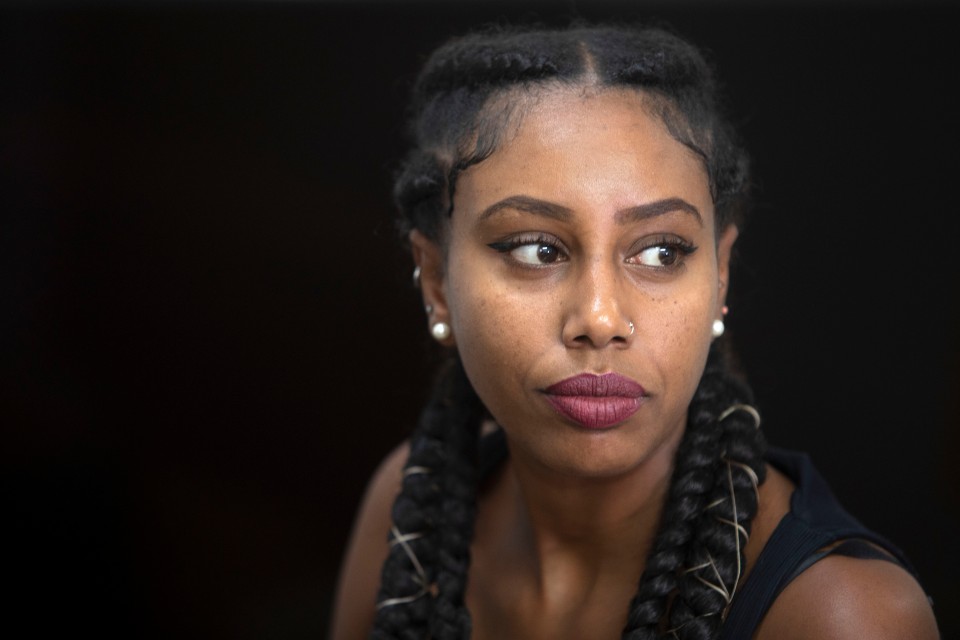 Although the song came out in 2017, it has reached new heights in the wake of street protests across the country following the killing of an Ethiopian Israeli teen by an off-duty police officer last month. This week the 23-year-old artist was invited to perform his song live on the popular news website Ynet.

"They want me trapped with handcuffs on my hands/they watch me with ten thousand eyes/they only see my skin color so they push me to the fringe," he rapped.

Neguse said the lyrics are relevant all the time, but they carry extra meaning for him in the current circumstances.

Neguse's appearance on Ynet illustrates the growing Ethiopian Israeli presence in the local music scene. But its theme also reflects the ongoing struggles against alleged racism and discrimination, some three decades after Ethiopian Jews began arriving in Israel.

Neguse and other young Ethiopian artists are using the stage to tell the public about their community's experiences — in particular what they say is unchecked and widespread police brutality.

Large numbers of Ethiopian Jews began arriving in Israel via secret airlifts in the 1980s. The new arrivals from a rural, developing African country struggled to find their footing in an increasingly high-tech Israel.

Throughout the decades, Ethiopians have suffered discrimination. In the late 1990s, it was discovered that Israel's health services were throwing out Ethiopian blood donations over fears of diseases contracted in Africa. Accusations have also been raised that Israel has deliberately tried to curb Israeli Ethiopian birth rates.

Today, Israel's Ethiopian community numbers about 150,000 people, some 2% of its 9 million citizens. While some Israelis of Ethiopian descent have made gains in areas like the military, the police force and politics, the community continues to struggle with a lack of opportunity and high poverty rate.

Against this backdrop, Israeli artists of Ethiopian heritage are breaking out in the entertainment world, especially in the growing hip hop and dancehall scenes.

Adam Rotbard, the owner of Kolot Me Africa, a group that promotes African music in Israel, said a "wave of young Ethiopian musicians" has burst onto the music scene in the last year.

"They are not really in the mainstream so to speak, but they are building substantial fan bases through social media and the internet," he said. Rotbard said issues like racism and routine police mistreatment are addressed in their music.

In his music video for "Handcuffed," Neguse is dressed up as a soldier, riding a bicycle, when he encounters two policemen. The officers then, seemingly unprovoked, beat him up. The music video depicts a 2015 incident in which two policemen were filmed beating a uniformed Ethiopian Israeli soldier, sparking mass protests.

The most recent demonstrations erupted after the unarmed Solomon Teka, 18, was fatally shot by a police officer in a Haifa suburb on June 30.

At the height of the unrest, protesters angrily swore at police officers, hurled firebombs, vandalized vehicles and set a car ablaze in the heart of Tel Aviv. Police say over 110 officers were wounded in the protests,

nd at least 150 protesters were arrested.

The officer in question, who has claimed the youth was accidentally hit by a warning shot he had fired at the ground, is being investigated by internal affairs and remains under protective custody.

Yerday said the demonstrators' anger and despair is long in the making, with a widespread feeling that police violence is not properly investigated.

"All of these people that attacked the youngsters unprovoked, they are exonerated, it's astonishing," she said.

The demonstrators are demanding greater police accountability. After the 2015 protests, the government established a committee to tackle racism against Ethiopian Israelis. It recommended that police wear body cameras. Since 2017 Israeli patrol and traffic police in some districts wear them.

But Yerday said the implementation of the body cameras has been slow. "The ones who beat up our kids don't have them," she said.

Police spokesman Micky Rosenfeld said that more officers will be equipped with body cameras in the future.

At a meeting called to discuss the matter, Prime Minister Benjamin Netanyahu called Teka's death a "big tragedy" and said "lessons will be learned." But he also harshly criticized the demonstrations for turning violent.

Yael Mentesnot, 26, another up-and-coming Ethiopian Israeli musician, said that in the past, the community has been "restrained" and "we end up coming off a bit naive."

This time, "the community has begun to really feel the despair," she said.

"All the protests, they are not orchestrated, nothing there was organized," she said. "Everyone went to the streets frustrated and released their anger."

While most of Mentesnot's young solo career has been filled with upbeat party songs, she said the recent events have inspired her to address the Ethiopian Israelis' struggle.

Our whole life is a struggle, we face challenges, and we overcome them

"Our whole life is a struggle, we face challenges, and we overcome them," she said. "I want the public to see it. To understand what we feel."

Neguse said he is pleased that Ethiopian musicians are on the rise, but said the recent protests should be seen as "a call for help, a cry of an entire community."

"I believe that everyone here has at least one Ethiopian artist on their playlist," he said. "But there is still racism, so there is a kind of dissonance."