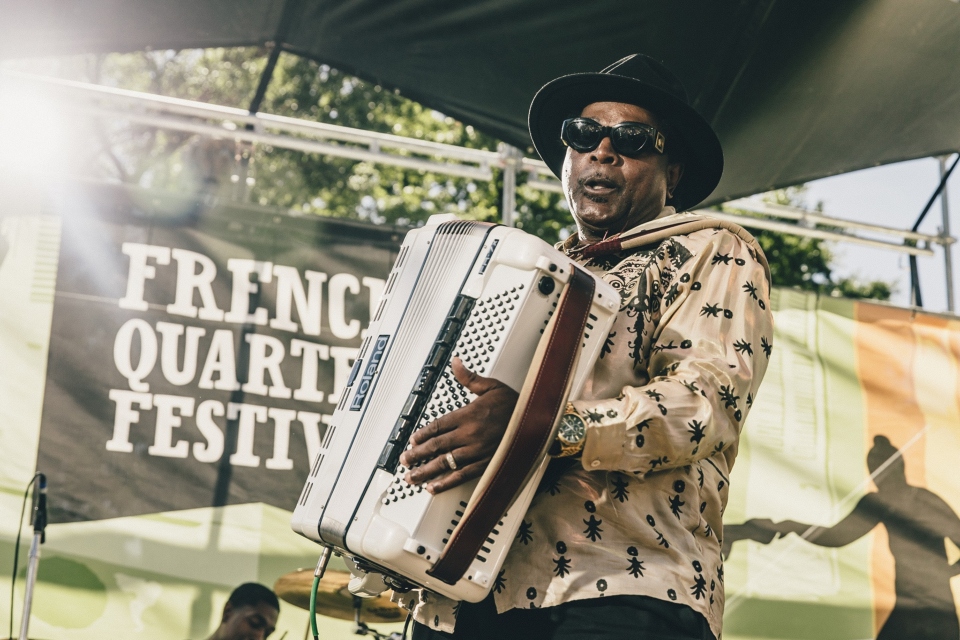 Billed as the world’s largest showcase of Louisiana music, food, and culture, the 36th Annual French Quarter Festival will take place April 11-14, 2019. The free event brings regional cuisine from more than 60 local restaurants and more than 1,700 Louisiana musicians to 23 stages -- all in the spirit of celebrating New Orleans’ diverse, unique culture.

French Quarter Festival is consistently voted ‘local favorite’ while attracting a tremendous out-of-town audience. The appeal is the authenticity: attendees experience a broad range of Louisiana artists from several genres. In 2019 the free festival will feature music from more than 250 acts on 23 stages throughout the historic French Quarter, including 43 new acts. Those making debuts include Galactic, Big 6 Brass Band, Keith Burnstein’s Kettle Black, Lil' Glenn & Backatown, The Royal Teeth, and Magnolia Sisters. In addition, musicians whose performances were cancelled due to inclement weather during the 2018 event were rebooked whenever possible.

Returning favorites include John Boutté, Erica Falls, Little Freddie King, Amanda Shaw, Bill Summers & Jazalsa, Irma Thomas, Water Seed, and hundreds more. Attendees can experience Louisiana legends in the streets of the Quarter each night of festival, thanks to the expanded Chevron Evening Concert Series. The Chevron Stage, a longtime Cajun/Zydeco destination, will feature more genres nightly, in addition their Cajun/Zydeco lineup; the Evening Concert Series includes Jon Cleary, George Porter, Jr. & the Runnin’ Pardners, Flow Tribe, and Rockin’ Dopsie. In Jackson Square, the Hilton Stage returns with an all-star lineup of New Orleans' most respected artists and culture-bearers including Ellis Marsalis, John Boutté, Leroy Jones, Shannon Powell, Robin Barnes, and James Andrews. The riverfront Abita Beer Stage brings four days of music including Rebirth Brass Band, The Iguanas, and Walter "Wolfman" Washington and the Roadmasters. The GE Stage returns with every genre from Funk to Gospel; artists include Chubby Carrier and the Bayou Swamp Band, Corey Henry & the Treme Funktet, and Paul Sanchez and the Rolling Road Show. Artists on the Jack Daniel’s Stage include Brass-A-Holics, Lena Prima, and Rory Danger & the Danger Dangers. At the Tropical Isle Stage, the lineup includes a Sunday morning Gospel performance from Betty Winn and One-A-Chord. At the Jazz Museum at the Mint, brass bands will be featured Friday-Sunday on the Louisiana Fish Fry Stage, and the WWL-TV Stage brings three days of music from crowd favorites like Benny Grunch and the Bunch, Creole String Beans, and Margie Perez.

French Quarter Fest kicks off the celebration nearly a month early, on March 22, 2019, with its annual gala fundraiser at New Orleans’ dazzling new venue, The Fillmore New Orleans. The hip, state-of-the-art venue, decked out with signature Fillmore nostalgia alongside aesthetic nods to NOLA, will open its doors to FQFI a month after its mid-Feb grand opening. All gala guests will experience a night with Grammy-winning trumpeter Nicholas Payton, full open bar, dinner, and a silent auction. Widely considered one of the greatest artists of our time, Payton began his career at the age of ten. His latest project, Afro Caribbean Mixtape, fuses the traditions of New Orleans with modern jazz, hip-hop, mixtape, and spoken-word. A Tribe Called Gumbolia will also bring Mardi Gras Indian drumming to the event. Honorary co-chairs are Mayor LaToya Cantrell, Chevron's Gulf of Mexico Vice President Mark Hatfield, and Irma Thomas.

The gala serves as a fundraiser for the non-profit French Quarter Festivals, Inc. and provides fans with a direct way to support the organization. Tickets are now on sale and can be purchased online at fqfi.org. Gala tickets are $150 or fans can upgrade their experience by purchasing VIP Patron tickets for $250. In addition to single tickets, tables are available for local businesses and team leaders who want a way to support the free French Quarter Festival and provide employees or important clients with an unforgettable VIP experience.

Ayo Scott has been selected as the 2019 French Quarter Festivals, Inc. artist; he will paint both the French Quarter Festival and Satchmo SummerFest posters. A native New Orleanian, Scott graduated from Xavier University in 2003 and attended graduate school at The Institute of Design in Chicago. Immediately after Hurricane Katrina, he returned home to help the city rebuild. During that time, he started NOYO Designs Inc. and began to evolve from commercial graphic design work to making his own art. “It is my profound honor to be chosen as the official poster artist for this year’s French Quarter Festival and have the chance to pay tribute to a musical legacy,” said Scott.

Festival organizers are thrilled to announce a program that will allow attendees to recycle plastics and cans at French Quarter Festival presented by Chevron. Clearly marked receptacles donated by Pepsi will be placed throughout the grounds and entry-points, and reusable souvenir cups will be available for purchase at festival beverage booths. This initiative is part of FQFI’s goal to reduce waste and contribute to a sustainable future. “French Quarter Festivals, Inc. is striving to be a Louisiana leader in waste reduction; it’s important to our long-term success and aligns with our mission to instill increased pride in our community,” said Emily Madero, President & CEO of FQFI. “Last year we introduced recycling at Satchmo SummerFest and diverted 1.4 tons of waste from landfills. We are thrilled to expand that effort at French Quarter Festival.” The organization is currently seeking a sponsor for the program and welcomes businesses who share FQFI’s vision for a greener New Orleans to join the initiative.

The 2019 French Quarter Festival will also focus on improved access to make the event more inclusive. A new partnership with KultureCity will bring a Sensory Inclusive Program to the event, designed to help guests with sensory needs like autism, PTSD, and more. The center will be staffed with professionals and work in tandem with the new ADA Info Booth and Services sponsored by Aetna Better Health of Louisiana. By implementing these new programs, FQFI aims to help ensure an enjoyable and safe festival experience for all.

French Quarter Festival Second-Line Kickoff Parade will take place Thursday, April 11 at 10 a.m. The parade departs from the 100 block of Bourbon Street and makes its way to Jackson Square.

The Jones Walker Let Them Talk Stage will return to French Quarter Festival featuring conversations with festival artists at the Jazz Museum at the Mint, 3rd Floor Auditorium on Saturday and Sunday at festival (April 13 and 14).

Dance Lessons, Dancing at Dusk, and a children’s area, the Chevron Children’s STEM Zone, are beloved special events that all return for the 2019 French Quarter Festival.