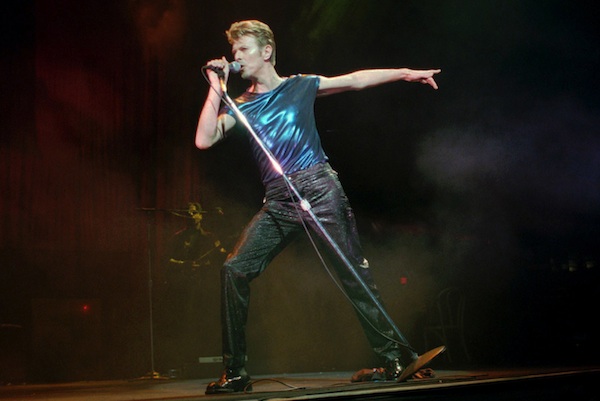 It was hardly a coincidence that David Bowie named his greatest hits collection "Changes."

Bowie changed musical styles, fashion, even his name — from David Jones — in a relentless exploration of the artistic muse. More than any one sound or song, that shark-like ability to keep moving forward defined him.

Even his exit was an artistic statement. He released a striking video last week for his new song, "Lazarus," that depicts him in an institutional bed, his eyes covered in gauze.

"Look up here, I'm in heaven," he sings in the song's opening. A thin Bowie also appears dressed in a bodysuit that seems left over from the "Ziggy Stardust" years, retreating to a closet at the song's end. The song, like the elegaic "Where Are We Now?" from 2013, has him confronting issues of mortality in haunting fashion.

We just never knew how close the end was. When it came on Sunday, Bowie had long since retreated from public view after a reported heart attack in the mid-2000s. He'd released no new music for a decade before 2013 and the subsequent "Blackstar," released Friday. He gave no interviews in his last decade, and kept his 18-month cancer fight private.

In 1982 David Bowie challenged MTV on live television over its refusal to play Black music. Read the Independent's story here.

Bowie quite literally seemed from another world in his early years. "The Rise and Fall of Ziggy Stardust and the Spiders from Mars" was a concept album about an alien bisexual rock star. With his makeup and orange hair, Bowie participated fully in an era of excess. The splendid songs poured out in the 1970s: "Changes," ''Starman," ''Suffragette City," ''Jean Genie," ''Rebel Rebel," ''Young Americans." He wrote Mott the Hoople's best-known song, "All the Young Dudes."

The bodysuit ultimately proved confining. Bowie wasn't the first artist to make stylistic shifts, but few did it with such aplomb. He delved into blue-eyed soul with his John Lennon collaboration, "Fame." He moved to Berlin to explore a minimal, industrial sound with collaborator Brian Eno. And in the mid-1980s era of Big Albums, Bowie appeared in a smart suit with the invitation, "Let's Dance."

That album, which also included the hits "Modern Love" and "China Girl," really marked the end of his mainstream success. Bowie kept moving, even if not all his explorations were rewarding; his 1990s band Tin Machine produced some unlistenable noise. The restlessness left him with a conflicted relationship with his old hits. He vowed to retire them after the 1990 "Sound and Vision" tour, but didn't stick to that and performed them with grace and enthusiasm on tour a decade later.

He was soft-spoken with a very British politeness in our only meeting, a 2002 interview where he allowed himself a brief flash of pride.

"What I'm most proud of is that I can't help but notice that I've affected the vocabulary of pop music," he said then. "For me, frankly, as an artist, that's the most satisfying thing for the ego."

Everyone touched by Bowie's music takes their own moment of inspiration. Kurt Cobain covered "The Man Who Sold the World" with Nirvana. Vanilla Ice repurposed Bowie's collaboration with Queen, "Under Pressure," into his biggest hit.

Personally, two recordings from 1977 will always stick out. One was Bowie's duet with Bing Crosby, made for a television special filmed just five weeks before Crosby's death. Crosby sang "The Little Drummer Boy," while Bowie sang "Peace on Earth" in counterpoint.

The culture clash made it an immediate classic — the World War II era crooner with one of rock's wildest personalities. It was hard to imagine them in the same room, let alone standing around a piano. Yet neither man looked down upon the other. Its beauty made the collaboration last, and it is heard every December.

That same fall, Bowie released "Heroes" from his sessions with Eno. The song starts quietly, Bowie singing over a droning, repetitive guitar figure, building gradually in intensity as his voice rises and he sings of a memorable but brief love affair. It's a moment of majesty that never fails provoke chills.

David Bowie had more than a day.