Despite Hits, No Radio Love Yet for Country Rap 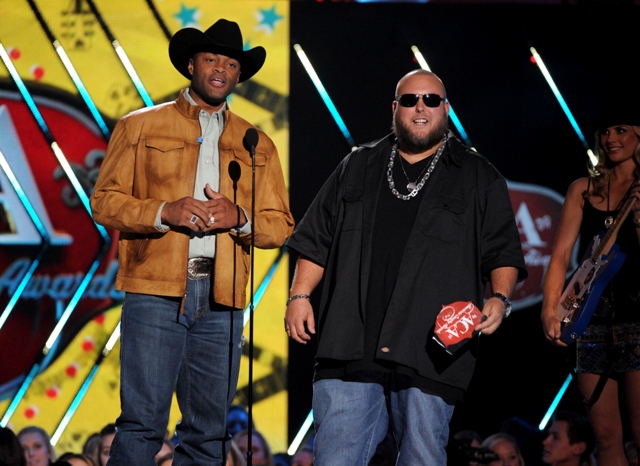 In this Dec. 10, 2013 file photo, Big Smo, right, and Cowboy Troy present the award for album of the year at the American Country Awards at the Mandalay Bay Resort & Casino, in Las Vegas. Even without mainstream radio hits, the blend of rapping, hip hop beats and country melodies has caught on through other outlets. Big Smo, a country rapper whose debut album on Warner Bros. landed in the Top 10 of both Billboard’s rap and country charts in June 2014, developed his own fan base, nicknamed “kinfoke,” with homemade YouTube videos shot on his family’s farm in Unionville, Tenn. (Photo by Frank Micelotta/Invision/AP, file)

NASHVILLE, Tenn. (AP) — When Jason Brown came to Nashville to start his career as the country artist Colt Ford, he couldn't find songwriters who would write for his singing style.

No surprise. Ford was bringing an unlikely mix to town: country rap, combining hip-hop beats and rhythms with country-themed rap or spoken-word lyrics.

"You might have found a song that you could have altered or changed a little bit," Ford said, "but you wouldn't have been able to find a record in that style."

But after country star Jason Aldean tried his hand at rapping on one of Ford's songs and turned it into one of the biggest hits of Aldean's career, songwriters, producers and mainstream country artists are now eager to work with him to figure out the key to this hot new sound in country music.

Still, Ford has never had his own Top 40 radio hit, even as his last album in 2012 debuted at No. 1 on Billboard's country album chart.

That may soon change. His new album, "Thanks For Listening," released on July 1, features a very radio-friendly duet with Keith Urban called "She's Like."

"When I hear what's going on in mainstream radio, I go, 'Well, why can't you play me? You play the other stuff that is exactly what I do,'" Ford said. "That's frustrating to me."

However, he says country radio stations also have to weigh regional and local tastes for a now much broader range of country music.

"If it's a hit song, it will get on the radio regardless of who is singing it," Hunnicutt said. "They are pushing the envelope. Maybe they are a little ahead of their time and how far you want to go with that, but they are doing their thing and being very successful."

Even without mainstream radio hits, the blend of rap and country elements has caught on through other outlets. Big Smo, a country rapper whose debut album on Warner Bros. landed in the Top 10 of both Billboard's rap and country charts in June, developed his own fan base, nicknamed "kinfoke," with homemade YouTube videos shot on his family's farm in Unionville, Tennessee.

He sees the trend of mainstream country artists exploring rap styles as a positive move for performers like him who are trying to break through on that sound.

"Timing is very important when it comes to things like entertainment because you have to have a mood set among the masses," Big Smo said. "I got very fortunate with my timing."

Big Smo is also tapping into another related demographic with his A&E reality show, "Big Smo." Just as "Duck Dynasty" and "Here Comes Honey Boo Boo" capitalized on a growing interest in middle-class families versus celebrity culture, Big Smo's show focuses on his friends, his family and their involvement in his growing music career.

And he's winning over critics one song and one episode at a time.

"That's why radio is going to have a hard time saying no to this new genre of music," Big Smo said. "Because people want to hear it. And it's the same with the TV show."