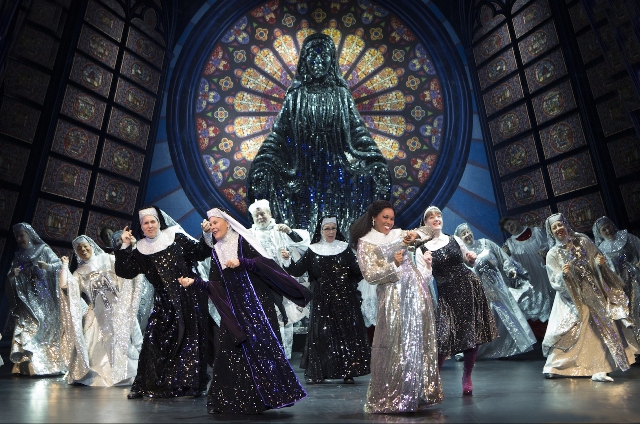 Campbell says the best part of the show is teaching the nuns to sing and dance. Photo by Joan Marcus

Sunday is the last night to catch the multi-talented Ta’rea Campbell, starring as Doloris Van Cartier in the Broadway Across America production of “Sister Act: The Musical,” at the Keller Auditorium. Previously appearing on Broadway in “The Book of Mormon,” “Little Shop of Horrors,” and starring as Nala in “The Lion King,” Campbell is burning up the road in her current role.

A native of Philadelphia who spent most of her formative years in acting and performance schools, Campbell is one of the hottest up and coming artists on the New York stage.

The Skanner News spoke with her about the show, her life and what she plans next.

The Skanner News: You have had an incredible career and you’re very young. Singing is difficult, dancing is hard, and acting is really hard. You are a triple threat! I just wanted to ask, how did you become a musical theater artist?

Ta’Rea Campbell: I became a musical theater artist in college, by accident.

I grew up in Philadelphia and I went to the high school for the creative and performing arts, it's called CAPA. I graduated with a major in acting there, and I had done a couple of musicals middle school and in high school. But I was really focused on being a straight actor, moving to New York and doing lots of plays.

When I got to MarymountManhattanCollege in New York City, a friend dared me to audition for a musical -- which I did not get, I think I sang the National Anthem or something – and the head of the musical theater department was quite impressed. She had really very few African American women in the program. She said, who are you, and where have you been? Please come be in the musical theater department.

I really didn’t have time in my schedule but essentially she let me audit a lot of the classes, so I graduated with a minor in musical theater. And after I graduated from college I began working at my college as an administrative assistant, but that didn't last very long because I quickly got a job, got my equity card, and I've been working ever since.

TSN: You’ve appeared off Broadway in a regional theater production of “Caroline, or Change.” It's a heartbreaking drama, completely different from the hilarious comic role that you're playing right now. Which roles are your dream roles?

Campbell: There are a couple. I think I'd like to be a mother first.

My second dream is that I would love to originate a role in a musical that is the story of human life, and not a black life. Very often as a minority woman you get cast in a show that is specifically written for a black person; as I get older that's really something that's important to me. And I would love to be in a movie version of “Sister Act, The Musical.”

TSN: “Sister Act” is considered to be one of the funniest movies of all-time. And of course the Broadway show one five Tony awards. What's the best part of the show?

Campbell: My favorite part is a number called “Raise Your Voice.” It's where Dolores is trying to teach the nuns how to sing, and they are really, really bad. And I get to listen to them sing poorly every night, on purpose, and it's really funny. And then I get to teach them dance moves. Because there's a lot of improv in the show, I get to make it something different every night, and they just have to follow along with what I'm doing. So for everybody, that keeps the show fresh.

TSN: I'm stuck on the fact that Whoopi Goldberg produced the show. It seems like a real labor of love, and she is, again, one of the smartest people in the United States in my own personal opinion. Why does that matter? What does she bring to the effort that maybe somebody else wouldn't have?

Campbell: She has a connection to the show, you know, she did the movie and she has a really sharp connection. I don't think she wanted to see it die and she saw a medium that would be marketable and successful and she was correct.

TSN: What's next for you? And have you ever thought about writing?

Campbell: That's very interesting that you asked that.

What's immediately next is that I'm planning my wedding. My husband and I eloped in November and we are planning a huge party celebration in September. It's quite difficult to do on the road and so, we have a lot of Skype business meetings as far as our wedding is concerned. and that's what I'm really planning on now.

But it's been a secret dream of mine to write a novel. I struggle with it all the time because it's difficult to get in that space of being totally creative while you're not at home. I'm sure it's fine for other people but I do think about writing every day.

Find out more about Campbell and get tickets to “Sister Act: The Musical” by clicking on this link.