Real Talk Story of the Day: The Occupy Portland Protest 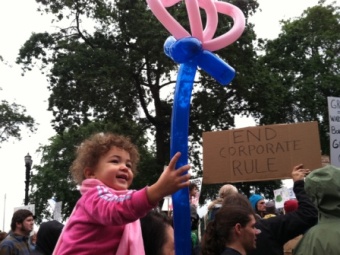 About 5000 people gathered at Waterfront Park Thursday afternoon for the Occupy Portland protest. Occupy Portland came together in support of the New York protesters 'Occupy Wall Street'.  The protests aim to highlight the growth of wealth and income inequality in the United States.  Individual protesters brought other issues to the march, including the continuing U.S. military presence in Iraq and Afghanistan.

The diverse and good-humored crowd carried signs signaling the issues causing most anger. Corporate tax avoidance, the Wall Street bailout and wealth inequality were the most common grievances – many expressed with humor.  "If we can't tax the rich, can we eat them?" said one sign. The Skanner News Video: Short video of protest A press release from organizers said: "This is in solidarity with Occupy Wall Street, where thousands have been staying near the Wall Street stock exchange to protest the corruption of Washington politicians, misdeeds of big banks, and the cancerous reign of corporate lobbyists." 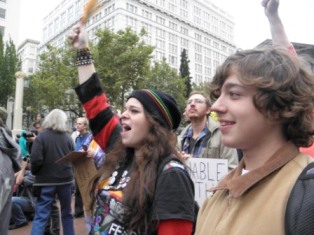 Also in evidence were masks, such as the Salvador Dali lookalike mask adopted by the hackers group Anonymous.

After meeting at the Waterfront, Occupy Portland protesters marched through the city center, stopped off at Pioneer Square, then came to rest at Chapman Square. About 600 committed Occupy Portland protesters spent the night in two parks near City Hall: Chapman Square and Lownsdale Square. This morning, Friday Oct. 7, both squares were scheduled to host organizers for the Portland Marathon.  Protesters decided to leave Lownsdale square, but attempted to remain in Chapman Square. UPDATE: Police, protesters and marathon organizers agreed that protesters could remain in Chapman Square and would not disrupt the race, scheduled for Sunday. Two young men were arrested, Friday and charged with spray painting slogans on walks and a police vehicle. 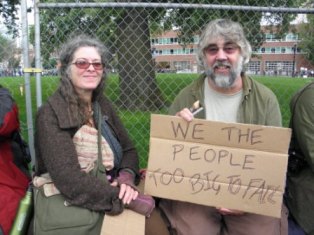 The protesters are organizing as a grassroots movement with no chosen leaders. Everyone's voice is equal, an organizer told KBOO radio. Decisions are made by concensus, meaning everyone has to come to an agreement. Without loudspeakers, the crowd repeats every statement made so that everyone no matter how far from the speaker can hear. The next general meeting is scheduled for Friday at 7pm. If police allow the protesters to remain at Chapman Square the meeting will be held there. If not, it will proceed at Waterfront Park under the Burnside Bridge. 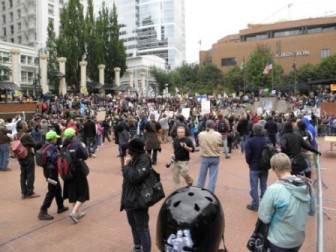 Organizers stress that this is a peaceful protest.  If police ask protesters to leave Chapman Square, they say they will not leave, but will allow police to remove them. Similar non-violent tactics were pioneered first by Ghandi and the independence movement in India seeking freedom from British colonial rule. Later the U.S. civil rights movement used nonviolence tactics successfully.. Several protesters carried signs quoting Dr. Martin Luther King Jr. 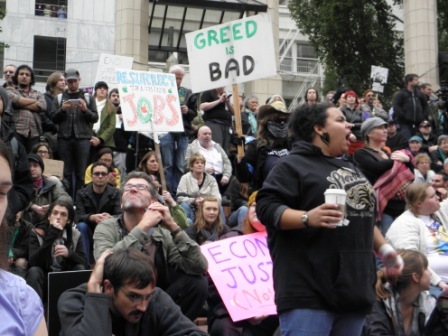 Van Jones, the former Obama advisor now working to create a left alternative to the Tea Party through the American Dream movement, says the Occupy Wall Street protests are the American Autumn, similar to the Arab Spring. Van Jones told Alternet: "… as the economic crisis gets worse -- it ain't gonna get better -- the formal economy is going to continue to contract. That means you're going to have a lot of people suffering due to the economy. That's going to create a need for a response. What are we going to do? How can we address the ways in which people are hurting -- immediate needs? That's going to be a driver of innovation, the economic crisis. People have to eat. People have to live indoors. People aren't going to just lay down and die because Wall Street wants to hold up the economic recovery." 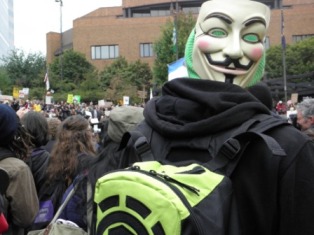 Wealth inequality has been growing in the United States, according to The Economic Policy Institute, which publishes the website inequality.org  Figures for 2009 showed the top 1 percent of the U.S. population own 35.6 percent of the wealth, whereas the bottom 80 percent of the population share just 12.8 percent of the country's wealth.  Protesters carried signs saying "I am the 99 percent and so are you," to draw attention to the disparities.

PUBLISHER OPINION
Several commenters are saying the demonstration lacks clarity.
The Skanner News Publisher Bernie Foster says it's clear to him. "People want to stop Wall Street and corporate lobbyists from driving our economic policies," he said. "You can't keep people unemployed and have children hungry  and homeless without raising a lot of questions about who is benefiting from our economic system."
On twitter #OccupyPortland