Honors are pouring in for a young Vancouver, Wash. high school jazz trombonist.
Sixteen-year-old Javier Nero is one of 18 high school musicians who have been named to the Next Generation Jazz Orchestra after a nationwide search and audition. That band is slated to meet for the first time in New York in July. While there, the orchestra will play one night at Lincoln Center's Dizzy's Club and another at Sweet Rhythm.
After those two engagements, the band will travel to Paris, France where it will play three or four engagements during a six-day stay.
The Evergreen high student is also the recipient of the Marianne Mayfield scholarship from the Jazz Society of Oregon. The $600 award will help pay for his training in Thara Memory's award-winning Pacific Crest Jazz program.
Nero, like many other Memory students, has flourished in the Pacific Crest band. He has performed with the band at the Monterey Jazz Festival, the Lionel Hampton Jazz Festival, Mt. Hood Jazz Festival and has won various soloist awards.


McNulty to Appear in Portland

Chris McNulty, one of the brightest stars in the up and coming ranks of singers will appear at Portland's Jimmy Mak's, Friday, April 27.
Ms. Mc Nulty whose latest release, "Whispers of the Heart" will be accompanied by veteran guitarist Paul Bollenback, whose other Portland appearances have been as a member of the Joey De Francesco Trio.
"Whispers of the Heart" was voted one of the top ten CDs of 2006 by the Jazz Journalists Association. She has been described as a jazz vocalist-composer with a unique vision, boundless creative energy and a distinctive style all her own. 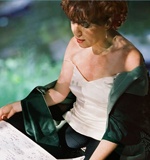 This release is a fabulous piano, bass and drums trio release, just about as good as can be found.
Falkner Evans, bassist Cecil Mc Bee and drummer Matt Wilson are so simpatico that their work seems like old pals who just happened to meet in a recording studio and decided to have a little fun. One highlight is "Easy to Remember" which supports the "old pals" theory. Thelonious Monk's "Ask Me Now" is taken at a faster pace than usual with a nice result. Evans also turns in a sterling unaccompanied solo on "I'm Through With Love."

Please, please do not let an unfamiliar name like Joel Frahm keep you from giving this youngish tenor saxophonist a fair hearing to become part of your collection.
This outing hears a man who knows his instrument. Combined with a sensational mix of his own compositions and a pair of tested standard ballads like "My Ideal," and "Spring Can Really Hang You Up The Most" can leave you saying, "Wow."
Then, just for the heck of it add the rhythm section of pianist Kenny Barron, bassist Rufus Reid and drummer Victor Lewis. Nuff said?
Frahm opens with an original, "Bob's Blues," which he takes at a leisurely pace. Barron is his usual perfect self and Reid's bass is resonant and strong. Frahm is strong on another original, the up-tempo "A Whole New You," blowing creatively and leaving out all the worn out and over-played clichés.
The tenth and last track is the title tune, "We Used to Dance," a love ballad begging for a lyric … it's that pretty.