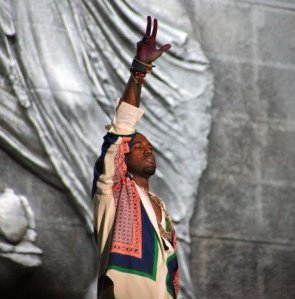 Love him or hate him, Kanye West will always be himself -- especially when he's burying the hatchet with Jimmy Kimmel.

The 36-year-old Grammy winner appeared on "Jimmy Kimmel Live" on Wednesday to discuss the feud the two got into a few weeks ago.

It all started with Kimmel's parody of West's recent interview with BBC Radio 1, during which he spoke at length about feeling artistically boxed in and the status of hip-hop as the new rock n' roll. (That's where West's now legendary quote, "I'm the No. 1 rock star on the planet," came from.)

Kimmel, who admitted Wednesday that he'd only seen a few portions of West's viral interview, latched on to the rapper's reference to leather jogging pants, which he says he invented before they became fashionable. For his late-night program on ABC, Kimmel re-enacted that portion of the interview with little kids.

"I wanted to clear this up. I really felt bad about all of this stuff, I did," Kimmel told West. "The main reason I did (the sketch) is because I like to see kids curse ... Most people maybe even think that this is some publicity stunt that we cooked up."

But of course, West doesn't do publicity stunts, "period," he said.

"Everyone out there ... needs to know that I've never done a publicity stunt in my life. Anytime I've went up and spoke my mind, whether it put my career in jeopardy ... it was always what I thought was the truth. I don't follow rules of normal celebrity."

In the end, West explained, Kimmel became a sort of scapegoat for all the other members of the media who've published "bogus" information.

West said his frustration admittedly escalated after his initial phone call with Kimmel about the sketch.

"It elevates sometimes," West said. "At a certain point, egos flare up, and we just kind of took it back to high school for a little bit."

For Kimmel, it was odd to be in a feud with West, someone he's gotten to know well enough where he has found himself defending the artist's reputation.

"A lot of times, I think you bring it on yourself, this misunderstanding about you. I don't know if you know this, but a lot of people think you're a jerk," Kimmel told West. "I often, in my own personal conversations, say, 'No, I know this guy, he is not a jerk.'"

Yet to West, likability is apparently immaterial.

"I'm not running for office, I'm just here to make good music," West said. "When I did that interview, I was really vocal about a lot of the things that I've been dealing with over the past 10 years when I was put in the classification of 'just a celebrity.' For me, I'm a creative genius, and there's no other way to word it. I know you're not supposed to say that about yourself, and I say things the wrong way a lot of times, but my intention is always positive. ... I want to help the world."

Kimmel pointed out those sorts of statements are what critics use against West, but to him, "to say that I wasn't a genius, I would be lying to you and to myself."

And since he was sharing his truth, West told Kimmel that he did find a bit of joy in his profane Twitter spree.

"As I was writing it, there was a frustration I was getting out, but also they were really funny to me. I just thought it was so amazing that I was saying this in real time with my position, because as soon as you're a celebrity you're not allowed to say anything anymore," West said, adding with a laugh, "You should've seen the second set of tweets."

Kimmel responded with a laugh, "Let's save them for next time."