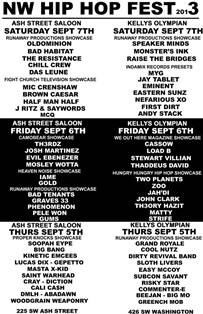 NW Hip Hop Fest 3 continued on Sep. 6 and 7 at Ash Street Saloon and Kelly's Olympian. The Skanner News cycled back and forth between the venues and got a number of pictures, as well as some videos, along the way.

Highlights of the Sep. 6 festivities at Ash Street included performances by the Bad Tenants (who, in addition to rapping, also sang and played the trombone and saxophone), IAME and Gold of Sandpeople with special guest Illmaculate, Josh Martinez and the Th3rdz. Meanwhile, Kelly's Olympian was treated to performances from Zoo, Two Planets, Stewart Villain, Load B, and Cassow, among others.

The momentum carried over to Sep. 7. Kelly's Olympian performances included Nefarious XO, Eminent, Monster's Ink and Speaker Minds. Five minutes away at Ash Street Saloon, the night kicked off with a high energy set from J-Ritz & Saywords. The spirit never really died down for the rest of the night. Performers included Brown Ceasar, Mic Crenshaw, Chill Crew, The Resistance, Bad Habitat and Oldominion.

For more photos, video, and other information, go to the NW Hip Hop Fest Facebook page.