Video: Lamar Odom Arrested on Suspicion of Driving Under the Influence 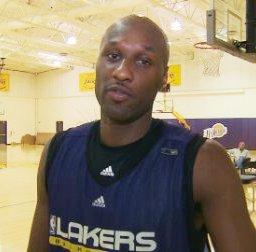 Lamar Odom was arrested early Friday morning for suspicion of driving under the influence of alcohol, according to the California Highway Patrol.

The basketball star was reportedly driving in a "serpentine manner at 50 mph" at 3:25 a.m., a highway patrol report said. Police pursued his white Mercedes SUV for several exits -- spanning about three miles -- before Odom came to a stop, according to the report.

Odom "showed signs of intoxication and was unable to perform field sobriety tests," according to police. He also refused all chemical tests when he arrived at the LAPD Van Nuys Jail, authorities said.

Odom was released at 8:30 a.m. with a promise to appear at the Van Nuys Courthouse on September 27.

"I've made a couple (of mistakes) and I may make a couple again, but hopefully they won't be as big as this one," Odom said during a news conference at the time.

Khloe Kardashian, who married Odom in 2009 after a 30-day courtship, tweeted about her frustrations last weekend after rumors surfaced that her husband was addicted to pain medications.

"Really hard to sit here and listen to people talk (expletive) about my family! (Expletive) you and shame on you! I'm too protective for this (expletive)!" the reality figure tweeted August 25.

Odom and Kardashian have starred in their own show, "Khloe and Lamar," which aired on the E! network. Odom is a free agent who has played in the NBA for 14 years, for the Los Angeles Lakers, Dallas Mavericks and, most recently, the Los Angeles Clippers.