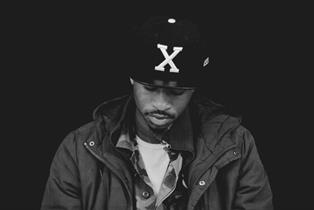 "I'm in a state of building," he says. "When things are under construction I don't really believe in screaming it out to the world what's going on."

Some might mistake his soft spoken demeanor and low key social media presence as a sign of quietness but it doesn't take long to figure out Washington, known on stage as Rasheed Jamal, has plenty to say. The MC sat down with The Skanner News to discuss his journey to Portland, music and building unity among artists.

Washington's album, "My Beautiful Ugly," became an under the radar hit in Portland earlier this year. He chose not to promote it or even let the public know what was coming. Instead, he text messaged the cover art to the contacts in his phone. Friends and newfound fans spread the word from there.

"My Beautiful Ugly" is a collection of older songs, some of which were recorded in closets. The album is arranged into a story and yet he admits it was all over the place.

In many ways, it was a reflection of the journey he's been on for the last few years.

Washington hails from Hot Springs, Ark. In 2008, at the age of 21, he hopped a Greyhound Bus to Portland to get a new start.

Arkansas, at the time, had the second highest poverty rate in the nation. At 17.3 percent, it was significantly above the national average of 13.3 percent and the 13.4 percent rate in Oregon.

Although economic prospects looked better in Portland, Washington was leaving behind family, friends and a host of memories.

He grew up on his parents' gospel, jazz and old school music. His uncle was a blues musician and would take him to shows when he had to babysit.

Washington's interest in rap came from his older cousins.

When his mom married a man who lived in another town, he often found himself alone when he went to visit. Music became his escape. He would tape and memorize all the songs on BET and the radio. To this day, he knows all the words to Snoop Dogg's "Da Game is to Be Sold, Not to Be Told," and Lil Wayne's "Lights Out."

In 9th grade, he went with his grandfather to Houston to visit his cousin Patrick, who liked to record freestyles on his voice recorder. On one occasion, he made Washington join in.

From that moment, Washington was hooked.

He started recording when he was 14 and did projects throughout high school.

As he got older, his musical tastes broadened.

Washington became a fan of Nirvana, even though he admits he couldn't understand half of what Kurt Cobain was saying.

He enjoys artists that fans don't instantly "get," like Cobain and D'Angelo.

"I don't know if you've read the insert from Voodoo," says Washington. "He (D'Angelo) said that, 'When I did it, I did it because I get pleasure from the moment. I want people to always remember the moment when they do get what I was saying.'" 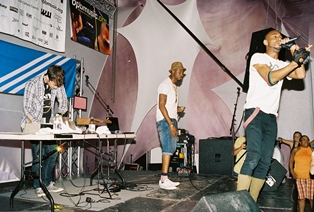 When he was 19, his father passed away, he started getting into trouble and lost the motivation to make music.

At 21, Washington started looking to make a move. He wanted to reinvigorate his art and had visited Oregon before.

"If you ever want to make a change, you've got to change your environment," he says. "It's one of the most rewarding experiences you could put yourself through because I'm still doing it now."

Since he's been in Portland, Washington has accumulated plenty of people he considers family despite not having any relatives here.

One part of that family is The Resistance, a collective featuring him, Micheal Caples, better known as Mic Capes, and Dracey Ware, better known as Glenn Waco. The seeds were planted during a chance meeting between Washington and Caples at Terrell Brandon's Barber Shop.

From there, Caples introduced Washington to Ware. All three showed an appreciation not just for each other's music, but for their other interests like Washington's book collection.

One night at Washington's house, the three were kicking around ideas for how they could grow as people. They devised a collective of artists throughout Portland. Capes suggested calling it "The Resistance" and the name stuck.

It all seemed to come together for a performance at the Fifth Flight Gallery. Surrounded by paintings, the crowd was filled with artists from a variety of mediums.

"It was a vision come to life for me," says Washington. "We had some of the best people there that were from here doing their thing. And it was cool because I knew all of them."

The idea of the larger collective, however, didn't materialize. Once the three MCs did a video for the song, "#TheResistance," people began to associate The Resistance with just them.

Washington hasn't given up on the idea of a collective but says it would have to be under a different name. 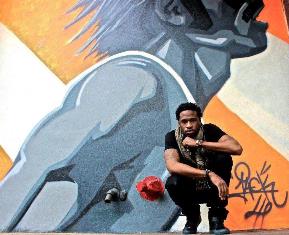 Unity is necessary, he says, especially in this climate where Portland hip-hop seems to be staring at a glass ceiling. Specifically, Washington says local artists are looked down upon by many Portlanders and venues around the city are steering away from booking hip-hop acts (This was covered in The Skanner News' Hip-Hop Crackdown Series, parts one, two, and three).

"I'm not even from here and I see it being taken away," says Washington. "At some point, people have to get tired of being written off."

He also encourages artists to resist the infighting that further exasperates the problem. If someone isn't trying to do harm, why stop him from expressing himself?

"I want my children to be okay with tolerating the next man," says Washington. "That's it's okay that you're different and you have your own thoughts and opinions and you have to stand alone sometimes."